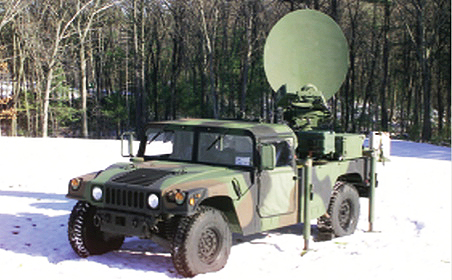 The SMART-T has an internal GPS receiver for positioning and timing necessary for satellite acquisition. The satellite terminal provides secure, jam-resistant, extended-range, two-way, point-to-point and network voice, data, and video communications operating at the MILSTAR low data rate 75 to 2,400 bits per second, and medium data rate as fast as 1.544 megabits per second. SMART-T can operate in intense electronic warfare and nuclear, biological, and chemical conditions, and can be removed from the humvee for fixed-site operations. A self-contained diesel generator powers the communications system. Raytheon will perform the work in Marlborough, Mass., and should be finished by 2018. Awarding the contract was the Army Communications-Electronics Command (CECOM) Acquisition Center at Fort Monmouth, N.J.