[SatNews] Launched in October 2006, Metop-A and its instruments are operating well beyond the design lifetime, but, nevertheless, are providing a full operational service to users, in parallel with the Metop-B satellite (launched September 2012). 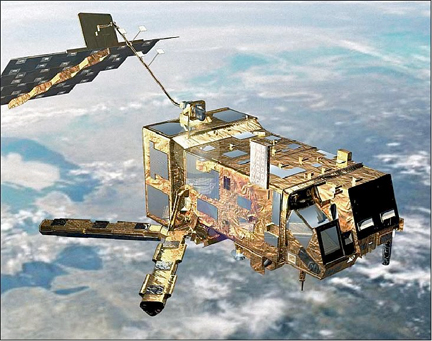 Artistic rendition of the Metop-A satellite.

The continuing provision of this dual-Metop service, providing added user-value for all instrument product chains, is an important goal of the organisation. On March 26th, the MHS on Metop-A entered a 'Fault Mode' during routine commanding, causing the suspension of the operational service from this instrument. The Anomaly Review Board (ARB)—comprising EUMETSAT, ESA and Airbus DS (Portsmouth-UK) engineers—discovered that the most likely cause was a shorting of two heater switches, which was preventing the nominal operation of the instrument and could potentially lead to overheating and damage to other instrument components.

To fully understand the nature of the failure and its interaction with the on-board software, a series of in-orbit diagnostic tests were performed. Extreme caution was necessary to ensure that the instrument remained in a safe and stable state as the satellite left each 12 minute visibility period of the Svalbard ground station, before appearing again, 90 minutes later. Piecing together the accumulated knowledge from all the experts involved led to numerous operational procedures being modified to mitigate the impact of the failure and to restore a safe configuration, with each new procedure needing to be tested again in orbit. Furthermore, the recovery procedures from possible autonomous instrument mode changes which might occur due to error detection from the on-board software, had to be modified to ensure the instrument would be safe to permanently operate with only minimal operator interaction. All this was achieved without resorting to a change in the on-board software, which could have added many additional months of development and testing to the recovery process.

On May 20th, the instrument could finally be commanded into its operational Scan Mode and the subsequent product checks confirmed the good quality of all five measurement channels, allowing product dissemination to resume to users on May 21st.

The EUMETSAT Metop infosite is viewable at http://www.eumetsat.int/website/home/Satellites/CurrentSatellites/Metop/index.html