[SatNews] Spacecom, operator of the multi-regional AMOS satellite fleet, was awarded the Vision Award for “Most Promising Company of the Year” during a ceremony...

at SATCON 2012 in New York City. Spacecom was selected as one of three finalists for “Most Promising Company of the Year.” Company president and chief executive officer David Pollack accepted the award on behalf of the company. "Spacecom's vision to become a global satellite services provider offering high-quality satellite communications services is what propels our work every day,” said Pollack. “We’re proud that our hard work is being recognized. The AMOS brand is expanding worldwide, and by the end of 2013 we will be able to supply services to close to 80 percent of the global population," he added.

"2012 has been a fantastic year for the AMOS brand and Spacecom team,” continued Pollack. “In September, we were named the Best Regional Satellite Operator by Euroconsult at the World Satellite Business Conference in Paris. These awards testify to the success of our corporate vision and demonstrate the amazing work of our sales and technical staff, local and international partners, and management. I’m proud of our team's efforts and can assure you that we will not rest with these awards." 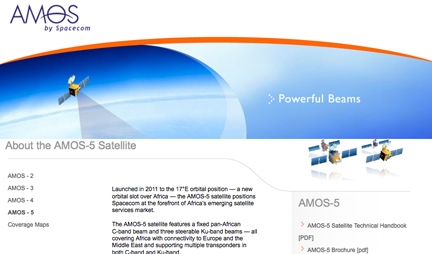 Spacecom’s most recent communications satellite, AMOS-5, was launched in December 2011 to the 17 degrees East orbital position to serve Africa with connection to Europe and the Middle East. Spacecom has several upcoming launches, including AMOS-4 in 2013 to 65 degrees East for serving India, South Asia and Russia, and AMOS-6 in 2015 to 4 degrees West to increase the company's capacity over the Middle East and Europe, including Western Europe.