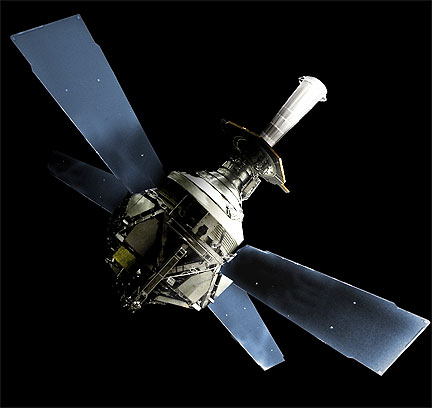 [SatNews] Launched on April 20, 2004, Gravity Probe B (GP-B) gathered data during its 16-month mission that have now provided verification for two subtle physical effects predicted by Albert Einstein’s General Theory of Relativity, which provides the foundation for an understanding of the large-scale structure of the Universe.

The geodetic effect—the warping of Earth’s local space-time due to Earth’s mass––has been confirmed to 0.28 percent accuracy. The frame-dragging effect—the dragging or twisting of Earth’s local space-time due to Earth’s rotation––has been confirmed to 19 percent accuracy. Stanford University was the GP-B prime contractor, NASA’s GP-B space vehicle was built, integrated and tested by Lockheed Martin (NYSE:LMT) at its Space Systems Company facility in Sunnyvale, Calif., and NASA Marshall Space Flight Center in Huntsville, Ala. managed the program. "It is wonderful to have completed this landmark experiment testing Einstein's universe. Einstein survives!" said Professor Francis Everitt of Stanford University, principal investigator of Gravity Probe B. "Developing GP-B was a supreme challenge requiring the skillful integration of an extraordinary range of new technologies. It is hard to see how we could ever have arrived here today without the unique kind of long-term collaboration we have had between Stanford, Lockheed Martin, and NASA."

“We heartily congratulate Professor Everitt on his hard won success in distilling the GP-B data,” said Joanne Maguire, executive vice president of Lockheed Martin Space Systems Company. “What distinguishes us as human beings is an innate curiosity that drives us to explore this magnificent universe, and our work with Professor Everitt and the NASA GP-B team on this mission and its discoveries will always be a source of pride for us.” 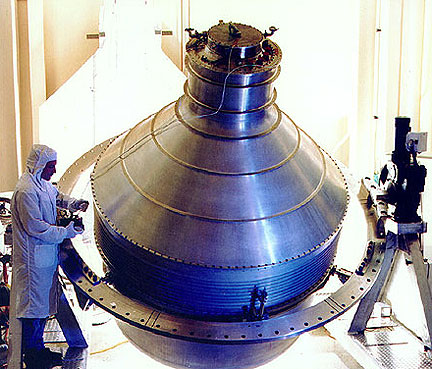 Gravity Probe-B, photo courtesy of Lockheed Martin
The principle behind the Gravity Probe B measurement is that ideal rotating gyroscopes, free of disturbing forces, always point in the same direction in inertial space. But this principle is where Dr. Einstein and Sir Isaac Newton differ. In Newton’s physics, a perfect gyroscope pointed at a star should stay aligned forever. In Einstein’s physics, the direction of the spin axis of the gyroscope would gradually change due to the mass and rotation of the Earth by an amount that could be exactly predicted. The gyroscopes measured two predicted effects of Einstein’s theory: whether and how space and time are warped by the presence of Earth, and whether and how the rotating Earth drags space-time around with it.

Relativists call the first of the two Einstein effects the ‘geodetic effect.’ The second is called the ‘frame-dragging effect.’ Small as the two effects measured by Gravity Probe B are, their measurement has provided an extremely important advance by testing previously unproven predictions of Einstein’s theory. They may provide critical clues to modern attempts to unify the four fundamental forces observed in Nature: electromagnetism, gravity, and the so-called strong and weak interactions that govern the behavior of atomic nuclei.

The GP-B space vehicle payload is made up of the dewar, the key structural component around which the GP-B space vehicle was built, and the flight probe, a nine-foot-long cigar-shaped vacuum chamber. Both elements were built at the Lockheed Martin Advanced Technology Center (ATC) in Palo Alto. Inside the flight probe is the very precise Science Instrument Assembly, built by Stanford University. The GP-B requirements for stability and freedom from outside forces were extremely demanding. The ATC team provided Stanford an enclosure within which the scientific instrument could operate at a temperature near absolute zero. The magnetic field at the Science Instrument Assembly was less than one millionth of the Earth’s magnetic field and the science gyroscopes inside the probe operated in a very quiet, low acceleration environment.

The Science Instrument Assembly was simple in its concept: A block of fused quartz 21-inches long, with a bonded quartz telescope on one end, held four gyroscopes. Very sensitive magnetometers provided the gyroscope readouts. The gyro-telescope instrument was held in the flight probe, which was inserted into the dewar, an extremely complicated Thermos-like bottle. The dewar held 613 gallons of superfluid, supercold helium that kept the instrument chilled to about 2 Kelvin (-455 degrees Fahrenheit) for the duration of the mission. When Gravity Probe B was launched into a 400-mile-high polar orbit, its science instrument measured minute changes in the directions of spin of the four ultra-precise gyroscopes contained within. The gyros were so free of disturbances that they provided a nearly perfect space-time reference system. They were referenced to the science telescope that sighted on a far-field highly stable reference star.

“Gravity Probe B is one of the few space missions NASA has conducted with relevance to fundamental physics,” stated a review of GP-B undertaken in 1995 by the Space Studies Board of the National Research Council. “If successful, it would assuredly join the ranks of the classical experiments of physics. By the same token, a confirmed result in disagreement with General Relativity would be revolutionary.” The ATC is the research and development organization of Lockheed Martin Space Systems Company (LMSSC). LMSSC, a major operating unit of Lockheed Martin Corporation, designs and develops, tests, manufactures and operates a full spectrum of advanced-technology systems for national security and military, civil government and commercial customers. Chief products include human space flight systems; a full range of remote sensing, navigation, meteorological and communications satellites and instruments; space observatories and interplanetary spacecraft; laser radar; ballistic missiles; missile defense systems; and nanotechnology research and development.