The event celebrated the company’s completion of a $140 million infrastructure improvement project that has increased operating efficiency, reduced costs and positioned the company to bring new programs to the Los Angeles facility. The Los Angeles site is Aerojet Rocketdyne’s center of excellence for large liquid rocket engines, where it currently manufactures the RS-68 engine components for United Launch Alliance’s Delta IV launch vehicle; adapts the RS-25 engine for the Space Launch System, America’s next generation heavy lift launch vehicle; builds missile defense propulsion; and most recently, it has become the design center for the AR1 engine, which the company is developing to replace the Russian-made RD-180 engine on the Atlas V launch vehicle. 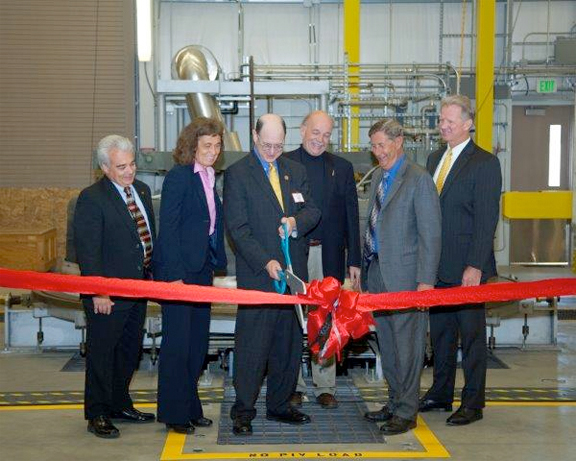 The RS-25 and AR1 engines are examples of capitalizing on proven, heritage systems to enable space exploration for generations to come and answer the urgent needs of national security. Aerojet Rocketdyne has been working on the RS-25 engines since they originally flew on the space shuttle. Four of these engines will fly at the base of the core stage for the Space Launch System, which is the rocket that will eventually take humans to Mars. The company is also currently building the AR1 engine to address the nation’s need to end the country’s reliance on Russia to launch national security space assets. The AR1 is the logical choice to minimize risk, cost and address the schedule needs of the country to have an American engine ready for 2019.

The project included the construction of a new 24,000-square-foot Component Test Center that provides unique structural, vibration, pressure, water flow and spin test capabilities; a new 20,000-square-foot nozzle assembly and fabrication center that includes a one-of-a-kind furnace that is capable of brazing the nozzle for the RS-25 engine; and a new 11,000-square-foot metallic and non-metallic materials testing lab.

“Over the past 11 years, our Los Angeles site has undergone a complex construction project focused on creating a world-class facility capable of manufacturing large liquid rocket engines,” said Aerojet Rocketdyne CEO and President Eileen Drake. “With the completion of this project, Aerojet Rocketdyne has a premiere propulsion and innovation center to design and build rocket engines. With this newly completed facility, coupled with our technical expertise, we will now be able to build the engines that will take astronauts to Mars and continue our leadership in launching the nation’s most critical and valuable national security assets. This investment demonstrates our ongoing commitment toward innovation and the next generation of world-leading propulsion systems, such as the RS-25 and AR1 advanced liquid rocket engines. Aerojet Rocketdyne has been the go-to provider of U.S. propulsion systems for the last 70 years and RS-25 and AR1 will continue that legacy.”