[SatNews] Chris Bergin of NASASpaceFlight.com reports on the latest launch by China... 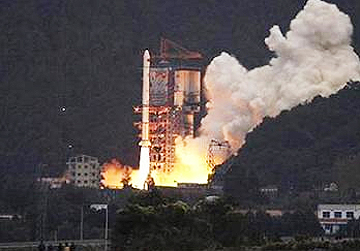 A record breaking 16th successful launch of the year for China took place at 21:07 UTC on Thursday, when a Long March 3A (Chang Zheng-3A) launch vehicle orbited a new navigation satellite – another for the BeiDou-2 Compass satellite navigation range – from the Xichang Satellite Launch Center, in Sichuan Province. This launch was the 16th successful orbital launch this year for China, breaking the previous launch record of 15 successful missions in 2010. Taking into account the launch failure on August 18th, this was the 17th space launch for China this year. The satellite that was orbited is the fifth BeiDou-2 IGSO (Inclined GSO) satellite of the system. The satellites were developed in the basis of the DFH-3B satellite platform and have a lifespan of eight years.

This constellation of Compass satellites will consist of 35 vehicles, including 30 MEO (21,500 km orbits) and IGSO (inclined at 55 degrees) satellites and five GSO satellites. The Compass Navigation Satellite System (CNSS) is China’s second-generation satellite navigation system approved by the Chinese government in 2004, and is capable of providing continuous, real-time passive 3D geo-spatial positioning and speed measurement. The system was initially used to provide high-accuracy positioning services for users in China and its neighboring regions, covering an area of about 120 degrees longitude in the Northern Hemisphere. The long-term goal is to develop a global navigation satellite network similar to the GPS and GLONASS by 2020.

The system will have two kinds of services: a civilian service that will give an accuracy of 10 meters in the user position, 0.2 m/s on the user velocity and 50 nanoseconds in time accuracy; and the military and authorized user’s service, providing higher accuracies. The first phase of the project will see the coverage of the Chinese territory but in the future the Compass constellation will cover the entire globe. The CZ-3A is equipped with a more flexible and sophisticated control system which supports substantial attitude adjustments to orient the payloads before spacecraft separation and provides adjustable satellite spin-up rotation rate. It has paved the way for the development of CZ-3B Chang Zheng-3B and CZ-3C Chang Zheng-3C, and become the basic type of GTO launch vehicles.

The CZ-3A is mainly used for GTO missions; it also can be used for LEO, SSO and polar orbit missions, as well as dual-launch and multiple-launch missions. The launch capacity of the CZ-3A to GTO is 2,650 kg, the lift-off mass is 241,000 kg, the overall length is 52.5 meters, the diameter of first stage and second stage is 3.35 meters, the diameter of third stage is 3.0 meters, and the maximum fairing diameter is 3.35 meters. CZ-3A consists of rocket structure, propulsion system, control system, telemetry system, tracking and safely system, coast phase propellant management and attitude control system, cryogenic propellant utilization system, separation system and auxiliary system, etc.

The launch success rate of CZ-3A is 100 percent since its maiden flight on February 8, 1994, when it successfully launched two experimental satellites (the Shi Jian-4 and the Kua Fu-1, a DFH-3 model). And it was awarded the “Gold Launch Vehicle” title by China Aerospace Science and Technology Corporation in June 2007.

Before the end of the year, China plans two more launches. The launch of the NigComSat-1R communications satellite for Nigeria is schedule to take place on December 19. Launched by a CZ-3B/E Chang Zheng-3B/E rocket from Xichang, this satellite will replace the NigComSat-1 satellite that lost power from the southern solar array and latter failed in November 2008 due to a technical error of the satellite’s northern solar array. The other launch schedule for December will orbit the ZiYuan-1 (2C) Earth resource satellite using a Chang Zheng-4B launch vehicle from Taiyuan.