[SatNews] The scientific imaging system OSIRIS on board Europe’s Rosetta captured a spectacular glimpse of one of the many boulders that cover the surface of comet 67P/Churyumov-Gerasimenko a couple of days ago. 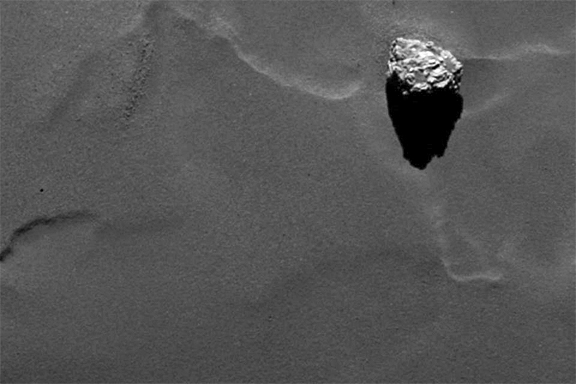 Close-up of the boulder Cheops as it casts a long shadow on the surface of comet 67P/Churyumov-Gerasimenko.

With a maximum extension of 45 meters, it is one of the larger structures of this kind on the comet and stands out among a group of boulders located on the lower side of 67P’s larger lobe. Since this cluster of boulders reminded the scientists of the pyramids of Giza, the boulder has been named Cheops after the largest pyramid within the Giza Necropolis. The boulder-like structures that Rosetta has revealed on the surface of 67P in the past months are one of the comet’s most striking and mysterious features. The large boulder—now dubbed Cheops—was seen for the first time in images obtained in early August upon Rosetta’s arrival at the comet. In the past weeks, as Rosetta has navigated closer and closer to the comet’s surface, OSIRIS imaged the unique structure again—but this time with a much higher resolution of 50 centimeters per pixel. As many of the smaller and larger boulders currently being mapped by the OSIRIS team, Cheops stands out from the darker underground. The highly resolved image now startles scientists with striking details.

"The surface of Cheops seems to be very craggy and irregular," OSIRIS Principle Investigator Holger Sierks from the Max Planck Institute for Solar System Research (MPS) in Germany describes. Especially intriguing are small patches on the boulder’s surface displaying the same brightness and texture as the underground. "It looks almost as if loose dust covering the surface of the comet has settled in the boulder’s cracks. But, of course, it is much too early to be sure," says Sierks. 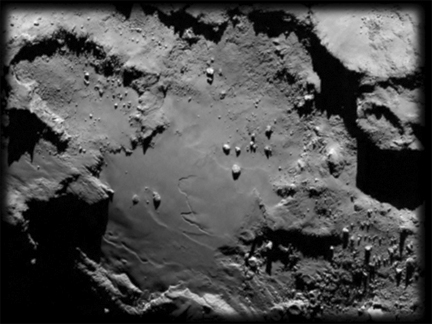 The group of boulders in the centre of this image reminded scientists of the Giza Necropolis. The largest boulder has therefore been named Cheops.

Apart from their size distribution, almost all properties of 67P’s many boulders are still a mystery to researchers. What material are they made of? What are their physical properties such as density and stability? How where they created? As OSIRIS continues to monitor the comet’s surface in the next months the team hopes for clues.

"If, for example, the boulders are exposed by cometary activity or are displaced following the comet’s gravity field, we should be able to track this down in our images," says Sierks.

Rosetta has already started its Close Observation Phase, reaching a distance of only 10 kilometers from the comet’s surface—and giving OSIRIS a chance at an even closer view of one of 67P’s many mysteries. With funding from the UK Space Agency and the Science and Technology Facilities Council (STFC), Rosetta is a mission with significant UK involvement from industry and science.

One of the main challenges for all the companies designing instruments for Rosetta has been to ensure the components remain intact for ten years, while the spacecraft makes its way to the comet, and then work perfectly when it gets there. Not an easy task!

Further information about the UK’s involvement can be found at http://www.rosetta.ac.uk