SatBroadcasting: TANDBERG To Show How To Migrate To HDTV 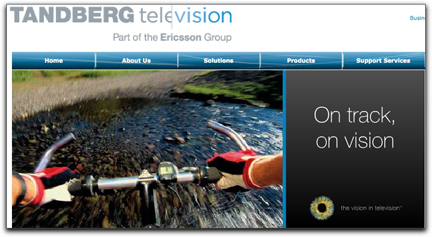 TANDBERG Television, part of the Ericsson Group (NASDAQ:ERIC), is using IBC 2009 to demo how the migration towards an all-HD television universe is now a realistic opportunity. Visitors to the joint Ericsson and TANDBERG Television booth (1:D61) will be able to see the world’s first MPEG-4 AVC HD 4:2:2 system solution for the C&D (Contribution and Distribution) market. The new system includes the world’s first MPEG-4 AVC HD 4:2:2 encoder and professional receiver that support up to 1080p50/60 HD encoding and which offers 10-bit precision. This opens the way to the large-scale migration from MPEG-2 to MPEG-4 AVC for the high quality 4:2:2 HD video used in the professional market, where one of the main requirements is moving content from its point of origin to where it will be transmitted. As a result, content owners and broadcasters will be able to deliver higher quality video for the same cost or meet current service requirements with less bandwidth. IBC attendees will also witnesses the global launch of the nexgen TANDBERG Television MPEG-4 AVC HD encoder for 4:2:0 video. This provides a 20 to 30 percent improvement in compression efficiency compared to today’s best MPEG-4 AVC HD encoding and will enable direct to home providers to carry more HDTV channels without increasing bandwidth costs. This product will help satellite, cable, IPTV and digital terrestrial television operators attract high value viewers with a greater choice of HD content. As part of a TANDBERG Television HD solution, the EN8190 encoder enables an additional HD channel per transponder for satellite operators when compared to alternative compression solutions.