Zephyr's reputation as the world's leading solar powered high-altitude long-endurance (HALE) Unmanned Aerial Vehicle (UAV) has been reinforced with a world-beating three and a half day flight at the US Army's Yuma Proving Ground in Arizona. The solar powered plane built by QinetiQ flew for 82 hours 37 minutes, exceeding the current official world record for unmanned flight, which stands at 30 hours 24 minutes set by Global Hawk in 2001 and Zephyr's previous longest flight of 54 hours achieved last year. The U.K. Ministry of Defence (MoD) has funded the development of Zephyr to date and has partnered with the U.S. Department of Defense (DoD) under their Joint Capability Technology Demonstration (JCTD) Program, which is designed to move urgently needed technologies rapidly into the hands of U.S. forces in the field. The US DoD funded the demonstration flight under the Program and this was the first time the two governments have participated in a joint demonstration of a HALE UAV. The flight trial at Yuma took place between July 28th and 31st in the harsh conditions of the Sonoran Desert in mid summer with temperatures up to 45°C (113°F). Zephyr was flown on autopilot and via satellite communications to a maximum altitude of more than 60,000ft. The trial included a military utility assessment of a US Government communications payload. 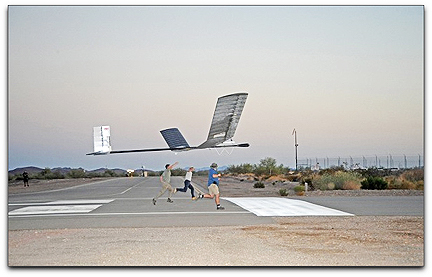 JCTD projects are specially tailored to meet the needs of US combatant commands. Zephyr is supported by USCENTCOM, the combatant command with responsibility for Iraq and Afghanistan, along with the Office of Secretary of Defence (OSD) for Advanced Systems and Concepts (AS&C) and the U.S. Army Space and Missile Defense Command (SMDC). Launched by hand, Zephyr is an ultra-lightweight carbon-fibre aircraft. By day, it flies on solar power generated by amorphous silicon solar arrays no thicker than sheets of paper that cover the aircraft's wings. By night, it is powered by rechargeable lithium-sulphur batteries, supplied by SION Power Inc., which are recharged during the day using solar power.
Topical Tags :
New Products
Military
Regional Tags :
North America