Exelis—WorldView-3 Sees Through The Smoke, Thanks To SWIR (Imagery)

[SatNews] The Exelis-built (NYSE: XLS) shortwave infrared imager (SWIR) on DigitalGlobe’s WorldView-3 satellite cut through a thick cloud of smoke to capture images of an active forest fire, marking the first time this capability has been commercially available from a satellite platform. 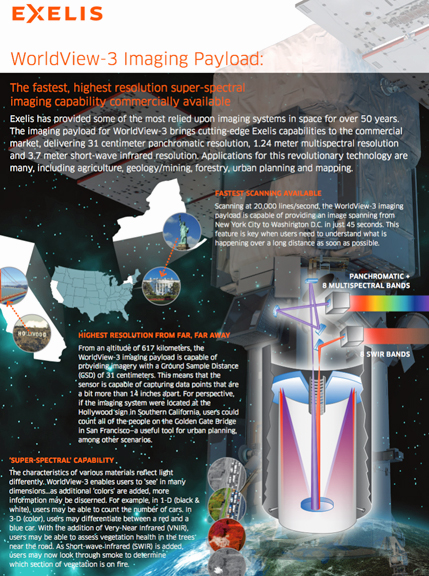 Exelis built the integrated, super-spectral imaging system, which includes a telescope, sensor and SWIR system, for the WorldView-3 satellite. This effort is a part of the Exelis strategic focus on advancing intelligence, surveillance, reconnaissance and analytics technologies. The advanced imaging system is the first of its kind on a high-resolution commercial imaging satellite and allows DigitalGlobe to expand its imagery product offerings to now include images taken through smoke or other atmospheric conditions. The satellite launched in August from Vandenberg Air Force Base in California and is now in orbit 617 kilometers above Earth. 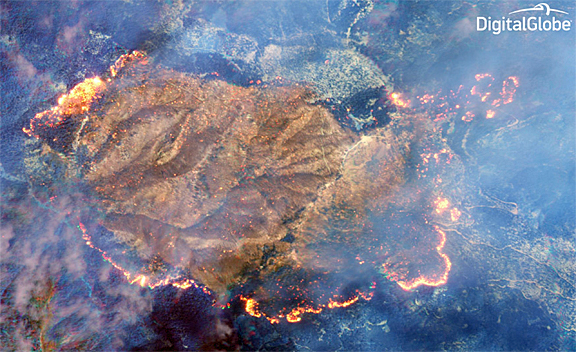 Image is courtesy of DigitalGlobe.

Taken above the Happy Camp complex in California’s Klamath National Forest, the images show an active fire beneath a thick cloud of smoke. Hot spots are clearly visible even without being shown at full resolution.

“These images show how SWIR technology can directly benefit firefighters and help save lives,” said Rob Mitrevski, vice president and general manager of Exelis Geospatial Systems. “SWIR can remove some of the guesswork in determining where hot spots are to help firefighters plan their approach. SWIR can also benefit other areas and industries where the need for accurate imaging through haze, fog, dust, smoke and other airborne particulates is important.”

Other imaging systems provided by Exelis include those on DigitalGlobe’s IKONOS, QuickBird, WorldView-1, GeoEye-1 and WorldView-2 satellites. DigitalGlobe’s WorldView-4 satellite, planned for launch in mid-2016, will also carry an Exelis-built imager.

The Exelis infosite may be accessed at http://www.exelisinc.com/

The DigitalGlobe WorldView-3 infosite is accessible at http://worldview3.digitalglobe.com/