....a Paul G. Allen Project, as a pioneering investment in space transportation. The company has been formed to build a mobile air-launch-to-orbit system that will include three primary components:


"The Stratolaunch Initiative is another bold step towards the key goal of reducing the cost of space travel” said,  Gary Barnhard, Executive Director of the National Space Society. “By providing a less costly, more flexible, and timely launch capability than existing ground based systems, the Stratolaunch team intends to achieve routine airport-like space transportation services to orbital destinations. NSS wishes clear skies ahead for their efforts,” he concluded. 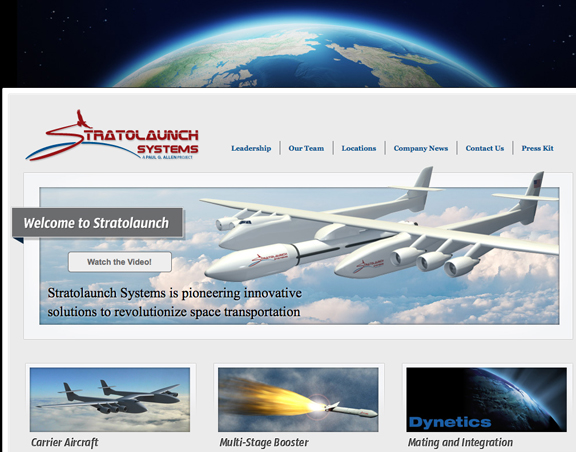 With an envisioned payload capability of 13,500 pounds cargo and/or crewed spacecraft delivered to Low Earth Orbit, a fully reusable first stage air-launch carrier, and the potential for evolution to a winged returnable second stage, the initiative holds great promise. In their announcement yesterday, Stratolaunch said, "...space has long been on Allen’s mind.  In the close of his memoir, Idea Man, published earlier this year, he hinted at his plans, writing that he was 'considering a new initiative with that magical contraption I never wearied of sketching as a boy: the rocket ship.'" NSS thanks Paul for endeavoring to bring his boyhood dreams into reality in this historic way.

Since 1974, NSS has been working to bring forward the day when humans will be living and working in thriving communities beyond the Earth, and the use of the vast resources of space are brought to bear for the dramatic betterment of humanity. Commercial space initiatives are bringing that day ever closer.