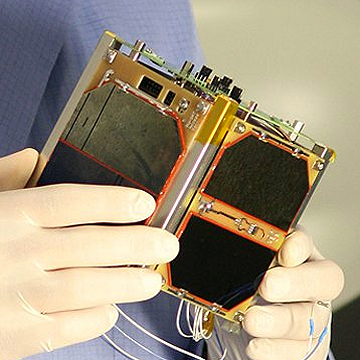 ....PW-Sat was successfully deployed on orbit. This first Polish satellite, built by students, was successfully launched by the new European rocket Vega. This marks the end of the preparation stage for the PW-Sat project and the beginning of a new era for the Polish space sector. The PW-Sat project was initiated in 2004 at the Warsaw University of Science and Technology (Politechnika Warszawska, PW) with the support from the Polish Space Research Center (Centrum Badań Kosmicznych, CBK). The main aim of this project is to educate engineering students through participation in a real space project.

The satellite is a CubeSat 1 unit (10x10x11, 3 cm, 1004 grams of mass) which hosts a deployable tail structure of 100 cm in length. Once on orbit, tested and verified, this tail will be deployed in order to speed-up the rate of PW-Sat's orbital decay. The deployment of the tail should result in a faster deorbitation of PW-Sat in approximately one year, as opposed to four years without the tail. If the tail works as designed, then PW-Sat might be the baseline for more advanced studies on a low-cost and effective deorbitation system for small satellites.

PW-Sat was deployed from the P-POD mechanism approximately 70 minutes after launch. One hour later, the first signal from PW-Sat was picked by the ground station in Warsaw, Poland. PW-Sat is an example of a modern approach to provide hands-on experience to engineering students. After graduation, most of the students working in the PW-Sat project will probably join the emerging Polish aerospace sector. Some of them already started to work in various space projects, including the BRITE-PL scientific satellites. (Source: kosmonauta.net)