Bigger, better, and already a Manufacturer of the Year by the Commonwealth of Massachusetts, and the company has added approximately 50 employees to staff the new Hudson facility.

In order to accommodate the rapid growth of its inflight entertainment and connectivity (IFEC) business, the Radant Technologies Division of Communications & Power Industries LLC (CPI) has opened a new radome manufacturing facility in Hudson, Massachusetts, with the official grand opening ceremony for this new facility is scheduled for October 23, 2018. Since 1979, Radant has been manufacturing radomes, reflectors and structural composite products from its existing facilities in nearby Stow, Massachusetts; with the addition of this new facility in Hudson, the organization has doubled its manufacturing capacity. 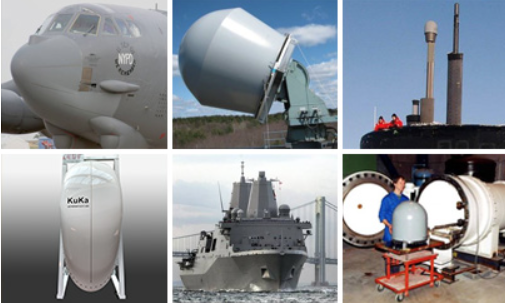 In October 2017, Radant was named a Manufacturer of the Year by the Commonwealth of Massachusetts at a ceremony honoring manufacturers “that stand out as an employer, an innovator and a model in business.”

The new facility, which is AS9100D and ISO-9001-2015 certified and has received approval from the Federal Aviation Administration (FAA), will house Radant’s high-volume production of radomes for IFEC applications, as well as its shipboard radomes and reflectors. It was designed using Lean manufacturing principles to enhance efficiency and reduce waste, and is large enough to accommodate entire product lines, eliminating the need to shuttle materials between the organization’s locations. These improvements are anticipated to enable Radant to double its production rates and significantly decrease cycle times for IFEC radomes. In keeping with commercial passenger increasing demands for improved in-flight connectivity capabilities, Radant expects its sales of IFEC radomes and related-products to continue to increase for years to come.

Bob Fickett, president and chief executive officer of CPI stated that CPI Radant Technologies Division has a great future in front of it supporting growing communications and defense applications. This new advanced manufacturing facility’s greater production capabilities will enable Radant to serve its customers that much quicker and for many years to come.

Don Buchman, vice president and general manager, Commercial Aviation, Viasat added that since 2014, Viasat has worked closely with CPI Radant Technologies Division to manufacture Ka-band and dual-band Ku-/Ka-band radomes for our IFEC systems. Viasat has continued to be impressed by Radant’s state-of-the-art manufacturing facilities, and they expect its new facility to offer enhanced technology systems to help them efficiently meet anticipated demand for new connectivity systems.