SkyFi's New Satellite Technology To Bring Internet Access To All

[Satnews] Israeli startup SkyFi has unveiled new technology at the Microsoft Think Next event in Tel Aviv that can bring the web everywhere and connect people across the world.

Universal Internet access has been unfeasible due to current satellite technology, which makes satellites costly to launch, prone to operational error, and thus financially risky for those who send them into space. 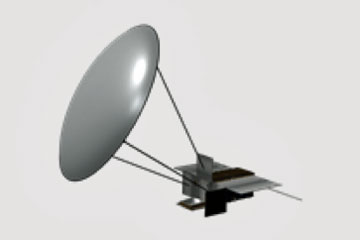 A model of SkyFi's turnkey communication system: the nano satellite pictured is approx 30 centimeters in length and 10 by 10 in cross section. The antenna (dish) is 55cm in diameter.

SkyFi’s innovation revolves around a flexible sub-reflector that compensates for any reflector shape imperfections. This does away with expensive, poor performing satellites by enabling a nano satellite to be sent into space with a 55cm diameter antenna folded up, greatly reducing launch load and costs. Once in orbit, the satellite’s antenna expands and the proprietary flexible sub-reflector enhances transmitting precision and power by as much as 500x.

Putting 60 such satellites into space using SkyFi technology would bring Internet connectivity to the entire globe and would be less expensive than the current cost of putting one satellite into space. Such a constellation of satellites would enable 1 gigabit per second communication bandwidth from anywhere on the planet. Moreover, SkyFi’s technology allows satellite owners to change the pattern of coverage on Earth while a satellite is in orbit, something that has not been possible to date.

SkyFi’s staff of aerospace engineers has several decades of combined experience working on both nano satellites and space antennae design.  Members of the team have filed over 20 patents combined, and have worked at Israeli Aerospace Industries, RaySat Broadcasting and Gilat Satellite Network, among others.

Based in Tel Aviv, SkyFi recently raised a $3 million investment round led by Jerusalem Venture Partners (“JVP”), one of Israel’s leading Venture Capital Firms. Liberty Israel Venture Fund, a subsidiary of Liberty Media Corporation, also participated in the round.

“The high flexibility of our nano satellites and the ability to provide multiple services to different customers enables us to offer free Internet access to the whole planet in the same manner as GPS services are free. We think this has the potential to bridge great divides and give everyone worldwide a part in the great global connected community,” said Raz Itzhaki Tamir, Co-Founder and CEO of SkyFi.

"The advancements in materials together with high end mechanics and algorithms have enabled us to design an unprecedented communication system," said Daniel Rockberger, Co-Founder and COO of SkyFi.

“We’re impressed with SkyFi’s strong team and see the huge potential of this disruptive technology. We envision a great future for this company and are very excited to have led a significant round of investment in them,” said Raffi Kesten, JVP Managing Partner.