...large set of Newtec M6100 Broadcast Satellite Modulators for content distribution across its nationwide network. This is part of a major upgrade to DVB-S2 and H.264 modulators, while at the same time implementing Carrier ID to reduce Radio Frequency (RF) satellite interference. In the United States, PBS has 354 member TV stations.

Nearing the completion of its 10-year project, the PBS Next Generation Interconnection System (NGIS) project, which is set to replace and significantly upgrade the current infrastructure that enables PBS, regional distributors, and other entities to distribute programming for broadcast by public television stations. The result of the upgrade to these latest technologies allows PBS to reduce its satellite capacity requirement from four to three transponders. 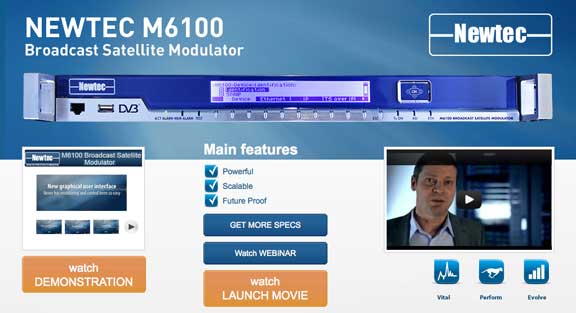 Many broadcasters and satellite operators around the globe are suffering from an ever increasing amount of satellite carrier Radio Frequency Interferences (RFI). Satellite interference happens as multiple carriers are beamed into the same space segment. The impact of such interferences is most often a complete loss of service for hours or days, which is the time required to find the source of the interference. Newtec has been actively supportive in bringing together different stakeholders throughout the industry to help develop a technology standard (Carrier ID) that reduces the impact of RFI from hours or days to minutes. As a result, Carrier ID is a unique “fingerprint” on an uplink carrier which enables satellite operators to identify transmissions to their satellites and coordinate with earth station operators to mitigate signal interference.

Newtec’s M6100, launched in April this year, already has this Carrier ID implementation. The M6100 is the new generation DVB-S2, DVB-DSNG and DVB-S modulator. It is specifically designed for contribution of television and radio content, which is the primary distribution of content and broadcast Direct-To-Home (DTH) distribution. The modulator interoperates seamlessly with any 3rd party DVB set-top box, professional IRDs and satellite demodulators.