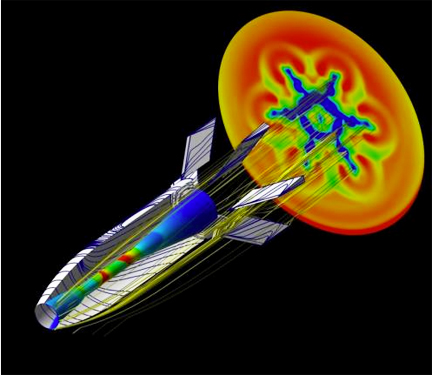 SCRAMSPACE1, artistic rendition
.... located in Gottingen to test an engine for an Australian Scramjet-based Access-to-Space Systems (SCRAMSPACE) experimental spacecraft - SCRAMSPACE I - scheduled for launch in 2013. Flight at 10 to 15 times the speed of sound? Flight at these speeds employs a 'SCRamjet' (Supersonic Combustion Ramjet), an engine designed for hypersonic flight at up to Mach 15. Unlike normal jet engines, there are no moving parts; a scramjet must first be accelerated to hypersonic speed in order to function. One of the leading countries in scramjet technology research is Australia, where scramjet combustion chamber functionality was first demonstrated during a test flight in 2002 — DLR was already involved in this experiment. Australians have set great expectations on scramjets for the future of space travel.

"They could increase efficiency and reliability and reduce costs," said Russell Boyce of the University of Queensland, SCRAMSPACE project leader. The advantage of scramjets is that they use oxygen from the atmosphere, so only the fuel needs to be carried on board. According to Boyce's projections, a scramjet would ideally be combined with a multi-stage rocket. Testing the scramjet engine complete with intake, combustion chamber and exhaust nozzle requires special facilities. One of these is the High Enthalpy Shock Tunnel in Gottingen (Hochenthalpiekanal Gottingen; HEG), where tests are currently being carried out. "HEG is one of the largest and leading facilities for hypersonic research, where the models investigated can be larger than those we study in Australia," says Boyce.

During operation of the 62-metre-long wind tunnel, a piston first compresses a gas that will act as a propellant. A steel membrane is then ruptured and a strong shock wave compresses and heats a test gas, before it is accelerated to 8800 kilometres per hour in the wind tunnel. The gas then flows around the model. "This scenario simulates flight at an altitude of around 30 kilometres," says Klaus Hannemann, Head of the Spacecraft Department at the DLR Institute of Aerodynamics and Flow Technology in Gottingen. The researchers are interested in the complex aerothermodynamic processes taking place in the scramjet. How must the fuel be injected? How can the combustion process be improved? They are also investigating whether the physical and chemical conditions can be transferred to a larger engine. Only significantly larger scramjets could be sensibly considered for use in spaceflight. The possible use of scramjets in spaceflight is still a long way away. "We want to explore the fundamental potential for scramjets in these tests," explains Hannemann.

Another challenge for scramjets is the development of new types of materials. The DLR Institute of Structures and Design in Stuttgart is a leader in this area and is supplying the control fins for the test flight. SCRAMSPACE I is scheduled for launch at the Woomera Test Range in Australia in March 2013. The 1.8-metre-long spacecraft will be transported to an altitude of 340 kilometres by two rocket stages. After leaving the atmosphere, the scramjet will separate from the launcher and control rudders will stabilise it for the return journey. During the return flight, the vehicle will be accelerated to Mach 8 - about 9900 kilometres per hour. The part of the experiment important to the scientists takes place at an altitude of between 27 and 32 kilometres. This is where the scramjet will ignite and a wide range of instruments will analyse the combustion.

The landing in the Australian desert will be harsh: "It will already have broken apart in the atmosphere and will simply crash land," says Boyce. The critical data for the researchers will have already been transmitted to the ground through a radio link. The mobile rocket base (MObile RAketen Basis; MORABA), operated by DLR Oberpfaffenhofen, will carry out the launch of SCRAMSPACE I. DLR Braunschweig has analyzed the aerodynamics of the scramjet. International partners involved in the Australian project include the Japanese and Italian space agencies.