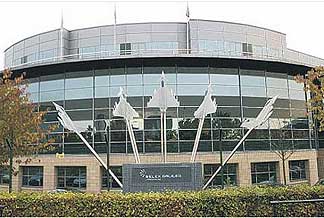 They may be a small Scottish company, but Selex Galileo, an Edinburgh-based defense electronics firm, has won 600,000 (£522,000) in funding to complete the development of an orientation system for satellites. The news of the funding comes after a report last week to grow the UK's space industry to be worth £40 billion per year by 2030, providing 100,000 new jobs. Selex Galileo is a small staffed office that is part of a larger, multinational division of Finmeccanica, an Italian industrial group. This company developed the gyro device that assists in keeping satellites oriented in orbit. Currently, Selex provides the gyros to ESA's global monitoring satellite, Sentinel 3.

This is only part of the news as Mark Hartree, capability manager for Selex Galileo, said the funding could boost the company's chances of winning a massive contract to use the gyro in the European Space Agency's (ESA) multi-billion-euro Galileo satellite navigation system, Europe's answer to the American Global Positioning System (GPS). It is said that should the endeavor proceed it would be the biggest deal for the space industry of Scotland.

The Space Innovation and Growth Team's (Space IGT) 20-year forecast for the UK is to grow their expanding global space market from six per cent to 10 per cent. Sure to help with this cause the company has worked with two other UK companies to develop the "disruptive" technology, and won the funding from the UK's Technology Strategy Board, which invests in research to stimulate technological innovation.