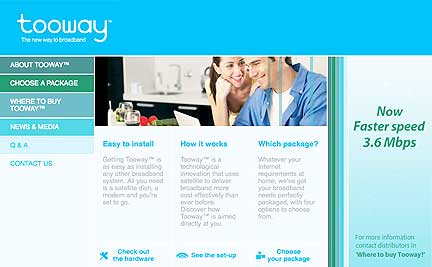 Tooway details at this link...
[SatNews] Tiscali, one of Italy’s main independent telecommunications companies, and Eutelsat Communications (Paris Euronext: ETL) have signed an agreement that will allow Tiscali to expand its range of broadband products with the launch of a satellite service targeting homes across Italy beyond range of high-speed terrestrial networks. Branded Tiscali BroadbandSat, the service uses the Tooway(tm) consumer broadband technology provided by Eutelsat Communications and its Skylogic affiliate. Tiscali’s choice of Tooway will enable it to leverage the seamless coverage provided by satellites to reach into the 12 percent of the Italian population unserved by ADSL or fibre.

Tooway is the first satellite based two-way broadband solution in Europe offering speeds and costs comparable to ADSL. The service is based on Eutelsat’s satellite coverage, the commercial and infrastructure operating experience of its Skylogic subsidiary, and technology developed by ViaSat which already powers Internet access for over 500,000 homes in North America. In Europe, Tooway is already serving customers in more than 20 countries including the UK, Germany, France, Spain, Italy, Switzerland and Ireland, with additional countries preparing to roll out service. The Tooway solution consists of a small satellite dish and a modem connected to the PC via the Ethernet, giving customers immediate broadband access following simple installation. With no need for a telephone connection, the service provides two-way wireless Internet access with speeds of 3.6 Mbps to the PC and 512 kbps from the PC. Tooway is currently provided using Ka-band capacity on Eutelsat’s HOT BIRD 6 satellite. With speeds starting from 10 Mbps, performance will be further enhanced in spring 2011 with the commercial availability of Eutelsat’s KA-SAT satellite which is being prepared for launch in November this year.