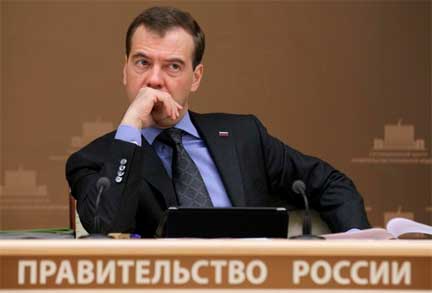 ...the Federal Space Agency Roscosmos to sort out its problems. "You will from now on report on the current situation, including the practical measures being taken to improve the quality of work in the industry, including essential issues and organizational form of the Roscosmos work," Medvedev told the agency's head, Vladimir Popovkin, during a government meeting.

Medvedev claimed production quality was the industry's most acute problem. "These topics must be worked out on the government level within a month. After that, I'll hold a meeting with all key enterprises of the (space) industry," he said, adding "other decisions" would also be made. Medvedev said hardships the industry had been experiencing, such as an aging production base, low-quality electronics and shortage of skilled human resources, could not justify the string of failures in recent years. "In the past one and a half year, there were seven failed launches, 10 satellites lost, billions of rubles cast to the wind," he reminded.

Medvedev warned he was going to make some decisions on those responsible for the failure this Tuesday. The Russian government plans to invest 650 billion rubles (some 20 billion U.S. dollars) in the industry between now and 2015. Since December 2010, Russia has suffered seven failed space launches, the most recent on August 7th when a Proton-M carrier rocket failed to put two telecommunications satellites into the correct orbit.

Now it appears as though Medvedev's words have struck home... Vladimir Nesterov, head of the Khrunichev State Research and Production Space Center in Moscow, has handed in his resignation, which is being processed, the source said. Speaking at a meeting with top space officials on Tuesday, Medvedev said a string of recent space failures tarnished Russia's image as a "leading space power" and instructed the government to draw up "practical proposals" on how to tighten controls on aerospace production. The Khrunichev factory makes Proton-M rockets as well as Briz-M upper stages. The company declined to comment when contacted by RIA Novosti.