Chinaview.com is reporting that a Chinese space scientist has said Chinese scientists are considering the feasibility of a manned lunar landing mission, at an appropriate time, between 2025 and 2030. 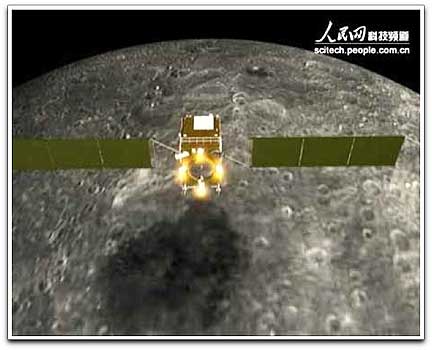 China will be able to fetch samples collected by unmanned lunar probe by 2017, Ye Peijian, chief designer of the lunar probe with China's Chang'e Project, said at a science lecture held last Friday in Shanghai. "Through the development of lunar probes, we have made constant progress of the ability to explore the outer space," Ye was quoted as saying by the China News Service. China launched its lunar mission in 2007 by successfully sending a unmanned probe Chang'e-1 to the lunar orbit. The spacecraft managed to transmit some pictures of the moon's surface back in January last year. Chang'e-1 ended its 16-month mission on March 1st of this year by impacting the moon, bringing the first phase of the nation's three-stage lunar mission to an end. The second phase will lead to a landing and launch of a rover vehicle on the moon's surface.

According to Ye, China will launch the second lunar probe Chang'e-2, in 2010 which will conduct research at a 100-kilometer-high moon orbit as the preparation for a soft landing by Chang'e-3. "By 2013, China will send the landing craft and rover vehicle to the moon," he said. The chief designer said that Chang'e-3 will use variable thrusters to make a vertical landing on the surface near the moon's equator area. The lunar rover will leave Chang'e-3 and work on the moon's surface for three months, Ye said, adding scientists have decided to adopt isotope technique generator to provide energy for the rover when it is in lunar nights when temperatures drop to 200 Celsius degrees below zero. For the third phase of the mission, China will recover a spacecraft carrying samples from the moon by 2017, and according to the current design of a sample collector, two kilograms of lunar samples can be brought back, Ye said.