Surrounded by company employees and Alabama state and local officials, including Governor Kay Ivey, Drake officially declared the AMF open for operation. The 136,000-square-foot AMF will produce advanced propulsion products such as solid rocket motor cases and other hardware for the Standard Missile-3, Terminal High Altitude Area Defense (THAAD) system, and other U.S. defense and space programs. In addition to current programs, which are being transferred from other locations, the AMF is designed for new program opportunities, including hypersonic and the U.S. Air Force’s next-generation Ground Based Strategic Deterrent (GBSD) program. 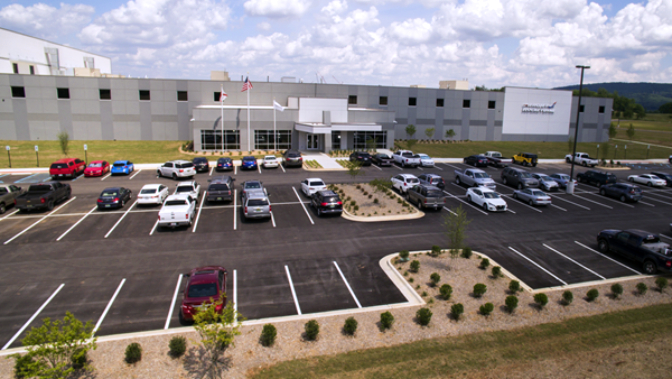 The Huntsville expansion and AMF are part of Aerojet Rocketdyne’s Competitive Improvement Program, which is aimed at reducing costs and increasing operational efficiency. Aerojet Rocketdyne officially established Huntsville as the headquarters of its Defense Business Unit in 2016. The company’s local workforce, which numbered approximately 70 in 2017, is now up to more than 400, with additional growth planned as the AMF reaches full production rates.

On June 6, Drake formally cut the ribbon on the 122,000-square-foot Defense Headquarters building and hosted state and local officials at an open house reception. Here, the company is supporting important innovations for America’s warfighters and explorers, from industry-leading hypersonics technology, to the advanced controller for the RS-25 engines that will power NASA’s Space Launch System.

The company CEO then stated that the AMF provides Aerojet Rocketdyne the capabilities the company needs to advance the nation’s security today and to further technologies that will allow the challenges of tomorrow to be met.  She cited key reasons for making Huntsville the center of its defense business — a highly technical workforce of engineers and scientists and the proximity of the company’s key customers and government partners, adding that Huntsville is a great place to build a future — and that’s what we are doing with our expansion here

Governor Kay Ivey added that this is an exciting day for Aerojet Rocketdyne, the City of Huntsville and for the entire state of Alabama. When a high-caliber company such as Aerojet Rocketdyne locates a cutting-edge manufacturing facility in your state, it’s a powerful testament to the skill of the workforce and to the advantages you can offer to business.