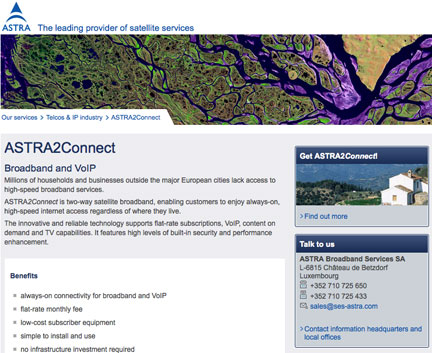 SES ASTRA, an SES company (Euronext Paris and Luxembourg Stock Exchange: SESG), has signed an agreement with the Romanian internet service provider E-Sourcing Know-How & Serv. Ltd. for the marketing of its satellite-based broadband service ASTRA2Connect in Romania. E-Sourcing will market ASTRA2Connect to households and businesses in isolated areas without access to terrestrial broadband networks. ASTRA2Connect is offered via distribution partners to end-customers and businesses in Europe, the Middle East and Africa. To date, the service has more than 75,000 end-users in 23 countries in Europe, thereby representing the largest satellite-based broadband network on the continent. Most recently, SES ASTRA has introduced a new technology to provide ASTRA2Connect to entire communities without end-users having to install their own satellite antenna.