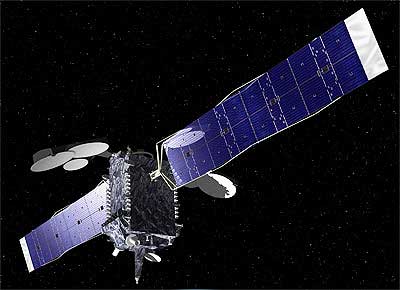 Artistic rendition of the HYLAS-2 satellite.
[SatNews] Avanti Communications Group plc (AIM: AVN, “Avanti” or “the Company”) has announced that HYLAS 2, its second satellite, will launch...

...at approximately 9.50 p.m. U.K.-time on August 2, 2012, via an Ariane 5 launch vehicle. HYLAS 2, which has almost three times the bandwidth capacity of HYLAS 1, will substantially increase the Company’s international coverage. It will provide high speed data capacity to a growing range of telecoms, enterprise and government customers in fast growing markets in Eastern and Southern Africa, the Middle East and across the Caucasus. HYLAS 2 will deploy 24 fixed beams and one steerable beam utilising pioneering Ka-band technology, offering customers flexibility and significantly improved use of spectrum, delivering increased speeds and data throughput at a much lower cost.

David Williams, Avanti founder and CEO, said, “HYLAS 2 services are already in great demand across The Middle East & Africa. The supply of capacity falls greatly short of this demand. In sub Saharan Africa, where there are more than ½ billion people who live more the 25km away from a fibre network, the GDP growth in that region is running at 6% per annum. Seven of the world’s top ten fastest growing economies are to be found in Africa, therefore we are delighted to be doing business on a continent where economic growth is not constrained by economic factors. We are also pleased to be bringing the freedom of communications to a new generation of public sector, business and consumer customers.”