On Orbit Ops For SSTL's GIOVE-A Reach A Full Decade

Since retirement from its original mission for the European Space Agency, SSTL has operated the spacecraft at 23,300 km, where it provides valuable data about the radiation environment in Medium Earth Orbit (MEO). An on-board experimental GPS receiver is used to map out the antenna patterns of GPS satellites for use in planning navigation systems for future high altitude missions in Geostationary orbit (GEO), and beyond into deep space. 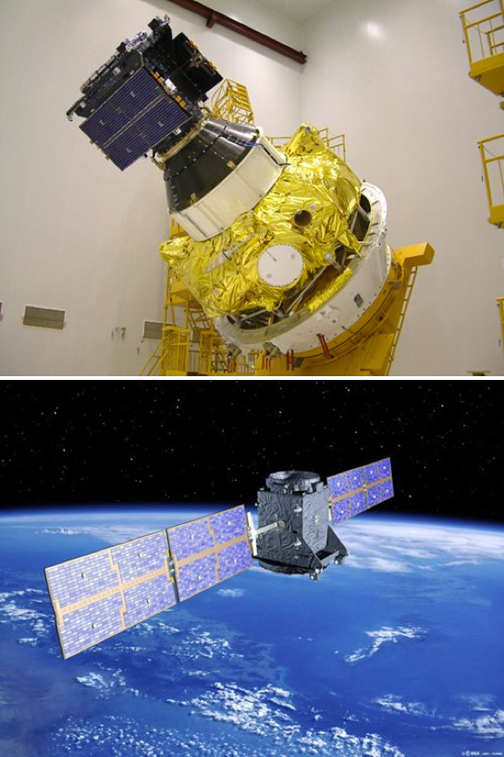 Photo and artistic rendition are courtesy of SSTL.

GIOVE-A was designed, built and tested by SSTL in only 30 months for the European Space Agency (ESA) and was launched on December 28, 2005, with a mission to secure vital frequency filings, generate the first Galileo navigation signals in space, characterize a prototype rubidium atomic clock, and model the radiation environment of Medium Earth Orbit (MEO) for future Galileo spacecraft. GIOVE-A was the first European satellite launched into the demanding MEO radiation environment, where it has greatly out-performed its 27 month design lifetime, and is still in operational use.

In 2008, GIOVE-A was declared a full mission success by the European Space Agency and the following year the pathfinder satellite was retired from its original successful extended mission and maneuvered into a higher “graveyard” orbit.  SSTL then took over spacecraft operations from ESA and, at its new altitude of 23,300 km, GIOVE-A has continued to provide valuable in-orbit data, both on the MEO environment and also from SSTL’s SGR-GEO, an experimental GPS receiver.

Designed and built by SSTL with the support of ESA and the UK Space Agency, the SGR-GEO receiver tracks GPS signals from transmitting GEO satellites, including the sidelobes not normally visible to ground-based systems.  The performance of GNS receivers at high altitudes is very sensitive to sidelobe strength, and data from the SGR-GEO is helping our understanding of the behavior that might be expected, allowing the development of new receivers for new missions at high altitudes.

The Merlin radiation monitor on-board GIOVE-A has collected a unique 10 year record for the MEO orbit and data analysis at the Surrey Space Centre, supported by ESA, has shown some interesting features such as the “electron desert” in 2008/9 during what was the lowest solar minimum of the space era, and one of the largest electron storm events on record in April 2010. Several scientific journal papers have been published from the radiation data generated by GIOVE-A and a new model of the outer Van Allen belt electron fluxes, ‘MOBE-DIC’, has been produced to help improve future satellite designs.

In 2010, following the success of the GIOVE-A mission, SSTL was awarded a contract to assemble, integrate and test 22 payloads for the full operational capability Galileo spacecraft for the European Commission.  Galileo is Europe’s own Global Navigation Satellite System, providing real-time positioning services, and it will be interoperable with the American GPS system and Russia’s GLONASS system.

Dr. John Paffett, Director of Telecommunications and Navigation at SSTL, said, “GIOVE-A is a milestone mission for SSTL which has demonstrated that our pragmatic approach and innovative, low cost, small satellites can deliver critical mission requirements for landmark space programs, such as Galileo.”

Keith Ryden, Reader in Space Engineering at the Surrey Space Centre, said, “We really hope Giove-A will continue to operate for at least another year to reach its 11th birthday which would give us a complete solar cycle of radiation data! Congratulations to SSTL for building such a robust spacecraft and squeezing so much value out of it.”