Newtec has announced that European Commission representatives, led by director-general Fabio Colasanti, of the Directorate General for Information Society and Media (DG INFSO), and additional key representatives from European institutions and Regions, attended a workshop on satellite telecommunications entitled “Bringing Broadband to the Regions”. Participants agreed that satellite Internet should play a vital role in an integrated approach to reach full broadband access across all European regions. 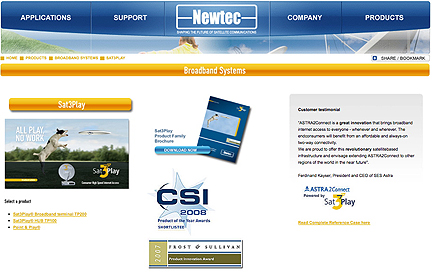 More Sat3Play info...
Hosted in Brussels by the German state of Baden-Württemberg, the list of participants in the Network of European Regions Using Space Technologies (NEREUS) inaugural workshop also included representatives from European space agencies and industry associations. Mrs. Aarti Holla, Secretary General of the European Satellite Operators Association (ESOA), opened the workshop with a live demonstration using Newtec Sat3Play® technology. The attendees had the opportunity to witness the real potential of today’s satellite broadband by browsing the web and accessing bandwidth-intensive applications such as video streaming, maps and Voice Over Internet Protocol (VoIP) calls.

The DG INFSO Director General noted the progress made by satellite technology over the past few years and his pleasant surprise at the excellent quality of the service. He was invited to make a Skype call during the demonstration and did so with ease and with no delay in the communications. The event made it clear that demonstrations such as these are necessary to change the perceptions of the older generation in EU institutions and elsewhere who still judge satellite broadband technology based on outdated performance rates.

The German ministry representative from Baden-Württemberg noted in his presentation the paradox of having European and Member States governments promoting the expansion of 100 Mbps fibre broadband, which will take years to arrive, while there are rural communities with no connectivity today who could be enabled immediately via satellite. Participants in the NEREUS workshop agreed that satellite Internet should play a vital role in an integrated approach to reach full broadband access across all European regions, especially when terrestrial solutions are prohibitively expensive and not realistic for the entire population. They called upon the European Commission to recognise the great potential of satellite to achieve 100 per cent coverage.
Topical Tags :
Manufacturing
Regulatory/Government
Consumer Applications
Service Provider
Regional Tags :
Europe