[SatNews] Like a cosmic light bulb on a dimmer switch, Saturn emitted gradually less energy each year from 2005 to 2009, according to observations by NASA’s Cassini spacecraft.

But unlike an ordinary bulb, Saturn's southern hemisphere consistently emitted more energy than its northern one. On top of that, energy levels changed with the seasons and differed from the last time a spacecraft visited in the early 1980s. These never-before-seen trends came from an analysis of comprehensive data from the Composite Infrared Spectrometer (CIRS), an instrument built by NASA's Goddard Space Flight Center in Greenbelt, Md., as well as a comparison with earlier data from NASA's Voyager spacecraft. When combined with information about the energy coming to Saturn from the sun, the results could help scientists understand the nature of Saturn's internal heat source.

The findings were reported November 9 in the Journal of Geophysical Research-Planets by Liming Li of Cornell University in Ithaca, N.Y. (now at the University of Houston), and colleagues from several institutions, including Goddard and NASA's Jet Propulsion Laboratory in Pasadena Calif., which manages the Cassini mission. "The Cassini CIRS data are very valuable because they give us a nearly complete picture of Saturn," says Li. "This is the only single data set that provides so much information about this planet, and it's the first time that anybody has been able to study the power emitted by one of the giant planets in such detail."

The planets in our solar system lose energy in the form of heat radiation in wavelengths that are invisible to the human eye. The CIRS instrument picks up wavelengths in the thermal infrared region, which is beyond red light, where the wavelengths correspond to heat emission. "In planetary science, we tend to think of planets as losing power evenly in all directions and at a steady rate," says Li. "Now we know Saturn is not doing that." (Power is the amount of energy emitted per unit of time.) Instead, Saturn's flow of outgoing energy was lopsided, with its southern hemisphere giving off about one-sixth more energy than the northern one, Li explains. This effect matched Saturn's seasons: during those five Earth years, it was summer in the southern hemisphere and winter in the northern one. (A season on Saturn lasts about seven Earth years.) Like Earth, Saturn has these seasons because the planet is tilted on its axis, so one hemisphere receives more energy from the sun and experiences summer while the other receives less energy and is shrouded in winter. Saturn’s equinox, when the sun was directly over the equator, occurred in August 2009. 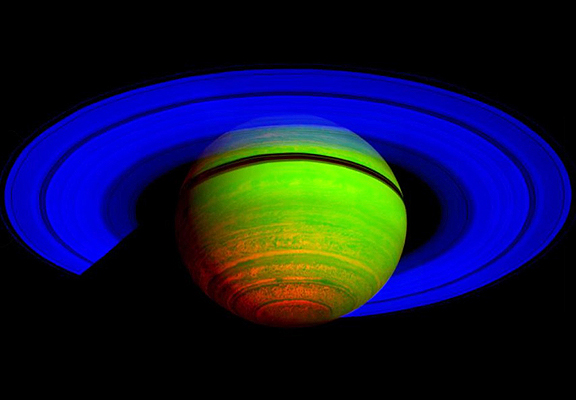 This false-color composite image, constructed from data obtained by NASA's Cassini spacecraft, shows Saturn's rings and southern hemisphere. The composite image was made from 65 individual observations by Cassini's visual and infrared mapping spectrometer in the near-infrared portion of the light spectrum on Nov. 1, 2008. The observations were each six minutes long.

In this image constructed from data collected in the near-infrared wavelengths of light, scientists designated blue to indicate sunlight reflected at a wavelength of 2 microns, green to indicate sunlight reflected at 3 microns and red to indicate thermal emission at 5 microns. Saturn's rings reflect sunlight at 2 microns, but not at 3 and 5 microns, so they appear deep blue. Saturn's high altitude haze reflects sunlight at both 2 and 3 microns, but not at 5 microns, and so it appears green to blue-green. The heat emission from the interior of Saturn is only seen at 5 microns wavelength in the spectrometer data, and thus appears red. The dark spots and banded features in the image are clouds and small storms that outline the deeper weather systems and circulation patterns of the planet. They are illuminated from underneath by Saturn's thermal emission, and thus appear in silhouette. Credit: NASA/JPL/University of Arizona 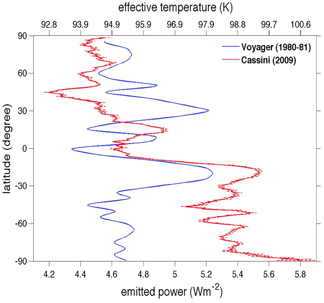 To find out if similar changes were happening one Saturn year ago, the researchers looked at data collected by Voyager in 1980 and 1981. Like Cassini CIRS, Voyager recorded fluctuations in the energy emitted by the planet and in the effective temperature. But Voyager did not see the imbalance between the southern and northern hemispheres; instead, the two regions were much more consistent with each other. Why wouldn't Voyager have seen the same summer-versus-winter difference between the two hemispheres? The amount of energy coming from the sun (called solar radiance), which drives weather and atmospheric temperatures, could have fluctuated from one Saturn year to the next. The patterns in Saturn's cloud cover and haze could have, too.

"It's reasonable to think that the changes in Saturn's emitted power are related to cloud cover," says Amy Simon-Miller, who heads the Planetary Systems Laboratory at Goddard and is a co-author on the paper. "As the amount of cloud cover changes, the amount of radiation escaping into space also changes. This might vary during a single season and from one Saturn year to another. But to fully understand what is happening on Saturn, we will need the other half of the picture: the amount of power being absorbed by the planet." Li is finishing an analysis of the solar energy that came to Saturn, based on data sets collected by two other Cassini instruments, the imaging science subsystem and the visual and infrared mapping spectrometer. He agrees that this information is crucial because Saturn, like its fellow giant planets Jupiter and Neptune, is thought to have its own source of internal energy. (The fourth giant planet, Uranus, does not seem to have an internal source.) By studying the changes in Saturn's outgoing energy along with the changes in incoming solar energy, scientists can learn about the nature of the planet's internal energy source and whether it, too, changes over time. "The differences between Saturn's northern and southern hemisphere and that fact that Voyager did not see the same asymmetry raise a very important question: does Saturn's internal heat vary with time?" says Li. "The answer will significantly deepen our understanding of the weather, internal structure and evolution of Saturn and the other giant planets."