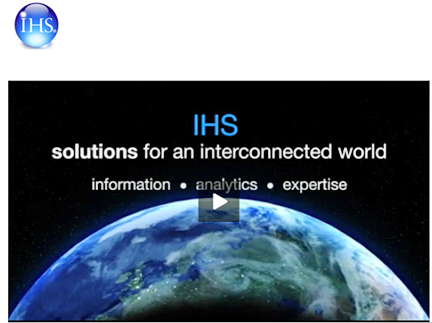 [SatNews] Culminating a dramatic six-year period of growth, the global market for professional broadcast equipment and services reached $63 billion in 2013, up 52 percent from $41 billion in 2007, according to new information from the IHS Technology (NYSE: IHS) Professional Video Research practice.

The rapid growth has been driven by a significant rise in shipments of customer-premises equipment (CPE) fueled by the digitization of payTV subscribers. The market’s expansion also has been propelled by a rise in transport services, driven by an increasing number of linear channels and nonlinear views by consumers. While the factors that have powered the growth of the market are expected to remain in force through 2017, total spending on equipment is expected to slow significantly. Many core markets in North America, Western Europe and East Asia are facing slower CPE shipment growth.

The next wave of expansion through 2017 is expected to be driven by the provision of media-managed services, particularly those involving the transport, processing and management of digital content. By 2017, the managed service segment will grow to $32 billion, accounting for nearly half of the expected $69 billion total for the professional video market.

“Owing to the multitude of broadcasters and payTV operators in each country, there is a very diverse market of small to medium companies offering solutions in the industry,” said Tom Morrod, senior director for Consumer Electronics and Video Technology at IHS. “As a greater share of industry revenue shifts toward services, we’re also seeing new entrants from the information technology, telecommunications and equipment industries trying to capture some of the new video service revenue.”

In all, the top 10 professional video vendors accounted for 28 percent of all market revenue in 2013. The attached figure presents the IHS forecast of the global professional broadcast equipment and services market.

The leading provider in 2013 was Cisco, which participates in diverse industries such as conditional access, set-top boxes, encoders, Internet Protocol and optical equipment and systems integration. Other major players tend have a primary focus on a single market segment, such as transport, set-top boxes or broadband CPE. These more specialized players include Arris/Motorola, Pace, SES, EchoStar and Samsung. The one notable exception is Sony, which has large ventures in two areas: the professional camera and the storage/server industries.

North America remained the dominant professional video market in 2013, but it is heavily dependent on CPE shipments, which are expected to decelerate in the region until 2017. Because of this, Asia-Pacific in 2017 will become the largest single market for broadcast technology, driven by growth in services, particularly surrounding satellite, fiber and teleport transport of increasing digital channels and content. The other major market, Western Europe, is expected to maintain stable revenues, as an increase in outsourced processing and transport services is balanced by a decline in the value of CPE and content capture equipment.