[SatNews] Arianespace and Astrium have signed a contract for 18 additional Ariane 5 ECA launchers, worth more than 2 billion euros. 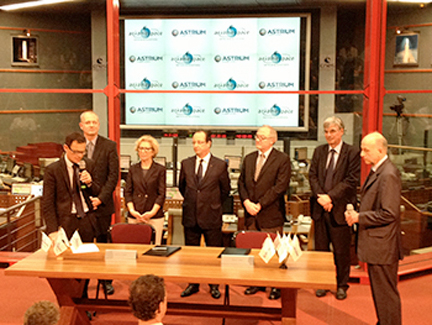 These 18 new Ariane 5 rockets will be launched starting in 2017, following the 35l aunchers that were already ordered in 2009, in the PB batch. The contract was signed on Saturday, December 14, 2013 by Stéphane Israël, Chairman and CEO of Arianespace, and François Auque, CEO of Astrium, at the Guiana Space Center in Kourou, French Guiana. The signing ceremony was witnessed by French President François Hollande and Geneviève Fioraso, French Minister of Higher Education and Research, along with Jean-Jacques Dordain, Director General of the European Space Agency (ESA), Jean-Yves Le Gall, President of French space agency CNES and Jean-Paul Herteman, President of Safran.

This latest order brings the number of Ariane 5 launchers under construction or on order to 38. It ensures that Arianespace's customers will enjoy continued launch services from the Guiana Space Center until the end of the decade. This contract follows the framework contract signed by Arianespace on September 17, 2013, which already enabled Astrium and its partners to start procurement of long-lead items, and begin production of the new launchers.