[SatNews] According to Euroconsult’s newly released strategic review, Prospects for In-Flight Entertainment and Connectivity, the global In-Flight Connectivity market is...

...expected to grow at a CGR of ~42 percent over the next 10 years, with more than 12,000 commercial and 16,000 business airplanes to provide in-flight connectivity to passengers by 2022. With a take-up rate of less than 5 percent, in-flight connectivity services generated less than $300 million in revenue from airline passengers last year. The market is expected to grow to $1.3 billion by 2022.

“The number of connected commercial aircraft has dramatically increased since 2010,” said Wei Li, Senior Consultant at Euroconsult and Editor-in-Chief of the strategic review. “Currently, 56 airlines in the world provide passenger in-flight connectivity services via satellite or ATG networks. Most of the installations are from U.S.-based airlines such as United Airlines, American Airlines and Southwest Airlines; however, many airlines based in emerging markets are also starting to invest seriously in the sector. The majority of airlines with in-flight connectivity services can be found in Asia-Pacific alone.” 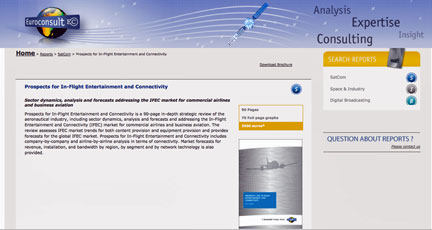 The traditional In-Flight Entertainment (IFE) market is highly consolidated, dominated by two companies—Panasonic Avionics and Thales. Several newcomers with specialized IFE solutions, such as Zodiac Aerospace, LiveTV and Lumexis, have gained market share globally. In particular, the in-flight connectivity segment has recently proved its dynamism for growth as a number of players such as Row44, OnAir, AeroMobile and Gogo are quickly developing their business across the globe.

On a larger scope, the IFE market is growing rapidly alongside in-flight connectivity. Over the past few years, several breakthrough technologies such as tablets, seat-centric systems, and wireless IFE have entered the market, transforming the in-flight passenger experience. Airlines are benefiting from new solutions which increase passenger satisfaction, reduce costs and provide more ancillary revenue opportunities despite some challenges, such as copyright management and telecommunications regulations over certain territories.

“The expected takeoff of in-flight connectivity will lead to a fast growing usage of satellite communications in the aeronautical sector,” said Wei Li. “The planned launch of new generation High Throughput Satellite (HTS) systems , such as Inmarsat Global Xpress and Intelsat Epic on a global level, and KA-SAT (from Eutelsat) and ViaSat on a regional level will certainly provide expanded capabilities compared to traditional satellites.“

In addition to the mature L-band and ATG networks, Ku and Ka-band satellite systems are increasingly being adopted by airlines. Capacity requirements from in-flight passenger traffic is expected to growth at a CAGR of ~42 percent over the next ten years, carrying close to 30Gbps of traffic over commercial Ku and Ka-band satellites by 2022. About one third of the traffic is expected to be over oceanic regions.