A consortium of three Luxembourg-based companies, lead by OQ TECHNOLOGY, will develop, build and perform a demonstration in orbit of an innovative approach for satellite-based Internet-of-Things (IoT).

Based on the On Orbit Demonstration of a single satellite to perform experiments using the new technology in space, OQ TECHNOLOGY aims to build a global satellite constellation dedicated to IoT communication by leveraging innovative wireless technology and using low cost connectivity solutions based on nanosatellites. 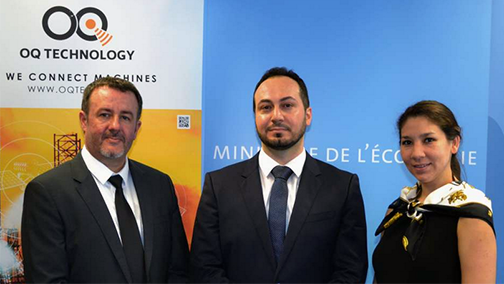 Photo, from left to right)

The project is specifically targeting the oil and gas, maritime, industry 4.0 and transport segments particularly for the management and tracking of assets in remote areas, as well as providing high-value data analytics. The funding provided for this activity under the LuxIMPULSE Grand Duchy’s national space program and the European Space Agency (ESA) amounts to a total maximum envelope of 6 million euros.

The consortium also includes EmTroniX, a company specialized in electronics development and GomSpace, a globally leading designer, integrator and manufacturer of high-end nanosatellites.

Marc Serres, the CEO of the Luxembourg Space Agency, said that this project showcases both the capabilities of and the collaboration potential among the actors of the national space sector. Creating effective partnerships on national level contributes to build a thriving ecosystem in Luxembourg that stimulates innovation and accelerates the evolution of business in space.