India... Eager To Join In (Satellite) 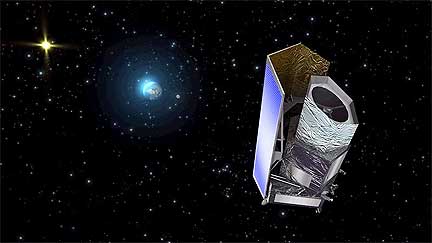 Artistic rendition of the ESA's Euclid satellite.
[SatNews] An Indo-French Science and Technology (S&T) cooperation may prove to be crucial in India’s...

...participation in the Euclid satellite project, which is dubbed as Europe’s biggest astrophysics mission aimed at studying “dark energy”. The Indo-French Centre for the Promotion of Advanced Research (IFCPAR), according to researchers, could provide the connect between Indian researchers and The Institut d’ Astrophysiqe de Paris (IAP) in France, whose Prof. Yannick Mellier would lead an international frontal research team to build a satellite to study the universe for the dark matters over five years. Competition to send a “good post-doctoral fellow” for the project is said to be intense across the world.

“In principle, India has a chance of joining this prestigious European project in which many institutions from different countries are involved,” said Dr. D. Narasimha, specialist in Cosmology and Gravitational Lensing at the Department of Astronomy and Astrophysics, TIFR, Mumba. A few days ago, the European Space Agency (ESA) had “formally adopted the largest collaboration of astronomers in the world, including scientists at the Max Planck Institute for Extraterrestrial Physics (MPE)” in Germany, to help build the Euclid Satellite to study the “dark universe” with great precision using a 1.2 metre telescope. Through the two major surveys over five years, Euclid will focus on “mapping the locations and shapes of billions of galaxies.”