Another Rover Being Scheduled for Launch to the Moon... by India 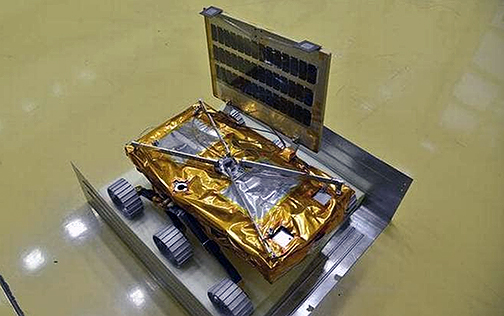 Photo is courtesy of The Hindu.

Another rover being prepared for launch to observe the surface of the Moon and to then relay data to analysts that would be useful for analysis of the lunar soil.

According to The Hindu Business Line publication, the Indian Space Research Organisation (ISRO) is likely to launch Chandrayaan-2, the country’s second mission to the Moon, next month, from a senior ISRO official. It is expected by the middle of next month; however, no date has been finalized.

Chandrayaan-2, a totally Indian indigenous venture, comprises an orbiter, a lander and a rover. After a controlled descent, the lander would soft-land on the lunar surface at a specified site and deploy a rover, according to the ISRO. The six-wheeled rover will move around the landing site on the lunar surface in a semi-autonomous mode as decided by the ground commands. The 3,290 kg. Chandrayaan-2 will orbit the Moon to perform remote sensing activities.

The payloads will collect scientific information on lunar topography, mineralogy, elemental abundance, lunar exosphere and signatures of hydroxyl and water ice, the space agency said. Chandrayaan-1 was India’s first lunar probe and was launched by the ISRO in October of 2008 and operated until August of 2009.