[SatNews]  Within the strategic cooperation framework between Azerbaijan and France in the space industry, “Azercosmos” OJC, national satellite operator of Azerbaijan, has signed a strategic cooperation agreement with Airbus Defence and Space to acquire the rights to operate and commercialize the SPOT 7 high resolution (1.5m imagery products) optical Earth Observation (EO)satellite, which was successfully launched on June 30, 2014, and is to be renamed as Azersky. 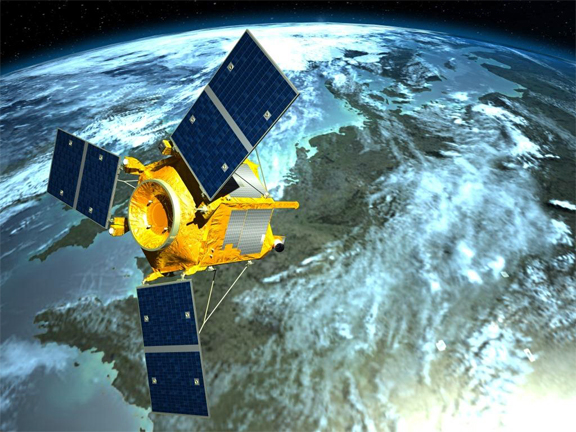 The agreement, which is an important step in the development of relations between Azerbaijan and France, was signed at Bakutel 2014 Telecommunications and Information Technologies Exhibition. The long term strategic cooperation between the two parties also includes joint operations of Azersky of Azercosmos and the SPOT 6 high resolution (1.5m imagery products) optical EO satellite of Airbus Defence and Space in a constellation to provide superior service. Moreover, the ground segment to be constructed will allow Azercosmos to access images acquired from Pléiades 1A and 1B, very high resolution (0.5m imagery products) optical EO satellites commercialized by Airbus Defence and Space. This satellite constellation opens up opportunities for many applications, providing the latest images within an unprecedented time frame. The combined acquisition capacity of Azersky and SPOT 6 is equal to six million square kilometers per day—an area ten times the size of France. This means that every day, every point on the globe can be viewed in high-resolution by the Azersky and SPOT 6 satellites.

Azersky was successfully launched on June 30, 2014, on a PSLV Indian launcher and was designed to survive harmful space conditions for at least 12 years. Azersky has a broad range of applications including, but not limited to, defence and security, emergency response, exploration of natural resources, maritime surveillance, sea faring, environmental protection, urban planning, cartography, agriculture, and tourism. During the next one-and-a-half years, more than 25 Azerbaijani professionals will be trained in France on optical satellite operations, product development, sales, and marketing of Geo-Information services. This agreement also marks Azercosmos’ entry into the commercial business of Earth observation services, including Geo-Information services. This will strengthen Azerbaijan’s position among the limited number of countries rendering satellite services.

To learn more about Airubs D&S, head over to http://airbusdefenceandspace.com/