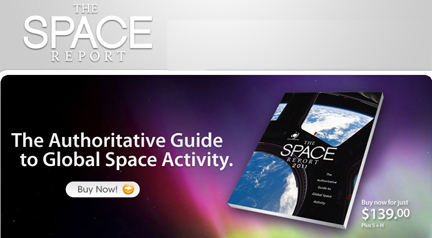 Space Report infopage
[SatNews] In spite of a challenging economy, the latest analysis and report from this organization reveals some amazing facts...

GPS and satellite television revenues continue to fuel overall growth in the space sector, helping the industry overcome a challenging economy. The overall global space economy rose to $276.52 billion in government budgets and commercial revenue in 2010, 7.7 percent above the 2009 figures reported by the Space Foundation. In addition, the space companies that comprise the Space Foundation Index shared in the general stock market recovery; as of December 2010, the index was 10 percent above its value at inception in June 2005.

These findings are among many facts in The Space Report 2011: The Authoritative Guide to Global Space Activity, which is now available for purchase and will be distributed to registrants at the 27th National Space Symposium next week in Colorado Springs. Published by the Space Foundation, this definitive overview of the global space industry serves as a valuable resource for government and business leaders, educators, financial analysts, students and space-related businesses. Copies — in print, on CD-ROM or as a downloadable PDF - can be purchased online at www.TheSpaceReport.org — and multi-user licenses are available. The 160-page book is full of space facts and figures, punctuated with photographs, charts and graphs illustrating the book's main points. Both the PDF and CD-ROM include hyperlinks to the companies, organizations, reports and other items of interest mentioned in the text.

Consumer Products Drive Growth — The two biggest contributors to sector growth were devices and chipsets that use the Global Positioning System (GPS) satellites for navigation and logistics, and Direct-to-home television that relies on satellites to deliver a broad range of customized programming to consumers. This is part of a trend of commercial growth that has been in play since 2005 and has contributed to cumulative global growth of a staggering 48 percent, with no year showing less than a 5 percent gain.

Within the overall gain for 2010, revenues for commercial infrastructure and support industries increased 13 percent, while commercial space products and services revenues increased 9 percent. In comparison, governmental spending increased by only 1.1 percent - almost entirely in non-U.S. space budgets. Although the worldwide number of launches declined for the first time since 2006 (down from 78 in 2009 to 74 in 2010), the number of payloads increased (up from 111 to 118). Russia led with 31 launches, followed by the U.S. and China, tied at 15 launches each, marking the first time China's launch rate matched the United States'. Despite the growth in the number of nations with space interests, no new nations entered the launch business, although South Korea conducted a second unsuccessful orbital launch attempt.

The Space Report contains extensive details on how each segment of the global space economy performed, including significantly more information on non-U.S. government budgets and incorporating data for the first time from Australia, Indonesia, Malaysia, Mexico, Pakistan, Taiwan, Thailand and Turkey. In addition, to detailing developments in seven sectors of space products, the Space Products and Services section of The Space Report includes a feature article on how multiple space technologies were used to help sustain and rescue the trapped miners in Chile last year, underscoring the positive benefits space exploration and utilization bring to our lives on Earth.

Although the U.S. space workforce decreased by about 1 percent in 2009, over the long term, The Space Report reveals that employment in this sector has remained relatively consistent and shown real salary growth, with the average U.S. space industry salary at more than double the average private-sector salary. The U.S. continues to maintain robust military space employment, despite a 6 percent decrease in 2009 (the most recent period for which results were available). Europe and Japan have also maintained their space workforce through periods of relative economic strength and weakness. Looking to the future, The Space Report examines the challenges facing the U.S. space workforce, including adapting to changes in NASA's human spaceflight program and maintaining knowledge and expertise in the midst of the retirement of an aging workforce.

Summing up the vast amount of data in the publication, the Outlook section in The Space Report cites some of the major trends that are driving the maturation of human space activity: increasing globalization, greater public involvement, continuing emphasis on the practical benefits of Earth observation and the commercial sector's increasing ability to derive financial and service

The Space Foundation is offering a special $30-off introductory price until April 30. Details and ordering instructions can be found at www.TheSpaceReport.org. The site also includes an overview of each chapter, a selection of downloadable charts and tables from the publication and additional information that was not published in the book due to space constraints.