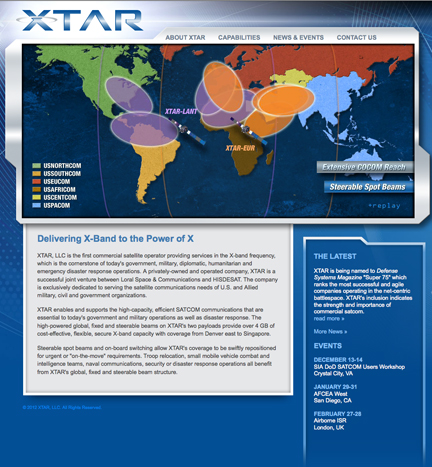 [SatNews] XTAR LLC, the first U.S. commercial provider of satellite services in the X-band frequency, announced that it has gained a...

...significant segment of the growing airborne intelligence, surveillance, and reconnaissance (AISR) market over the last 12 months. These contracts represent more than 100MHz of bandwidth and are valued at more than $8 million.

Under these various contracts, XTAR will provide high-powered X-band capacity on its XTAR-LANT and XTAR-EUR payloads to support critical services on manned aircraft using advanced antennas designed specifically for airborne applications. These terminals range in size from 0.8 meters down to very small 0.4 meters. This capacity will provide service over a coverage area extending from North and South America to Africa and the Middle East. Contract terms vary from six months to as long as 72 months. These services reinforce XTAR's commitment to providing operational independence and technical flexibility that help meet government requirements.

Advanced X-band satellites such as XTAR-EUR and XTAR-LANT deliver the ideal bandwidth to support small AISR terminals. Given the four-degree spacing between X-band satellites and X-band's ability to penetrate rain and other potential sources of interference, XTAR's constellation provides the most reliable and technically capable communications network for airborne and other mobile applications.

XTAR's success in the Airborne ISR market was achieved after an 18-month strategy to evolve the company away from supporting traditional satellite applications, such as point-to-point services, toward enabling the advanced applications required by today's warfighter. As part of this strategy, XTAR re-pointed several of its steerable spot beams to better accommodate airborne and other applications which rely on small terminals. The company hopes to capture a significant portion of the future AISR market by fulfilling many similar requirements, especially as today's global ISR market that is valued at over $18 Billion continues to grow substantially. As ISR sensors become increasingly smaller and more efficient, XTAR anticipates that its powerful satellite capabilities will enable increasing airborne missions.

XTAR is working with its value-added integrator partners to ensure that its advanced satellite capacity is available for government and military AISR requirements whenever and wherever they are needed. The company actively supports government and military users with commercial X-band satellite services to supplement the X-band payload of the Wideband Global SATCOM (WGS) system operated by the U.S. Air Force, which provides limited capacity and limited availability for this growing market of applications.