Gravity Ain't No Gotcha For GOCE 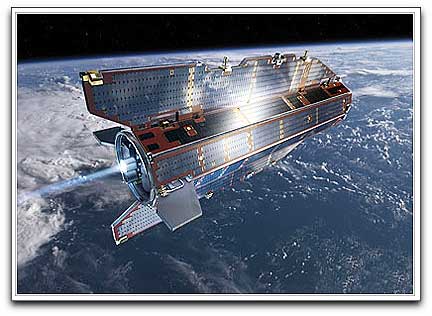 ESA's gravity mission GOCE has achieved a first in the history of satellite technology — the sophisticated electric propulsion system has shown that it is able to keep the satellite completely free from drag as it cuts through the remnants of Earth's atmosphere, paving the way for the best gravity data ever.

Volker Liebig, ESA's Director of Earth Observation Programmes commented, "I am very pleased to see another world premier by GOCE, after having already demonstrated the first gradiometer technology ever flown in space." Launched on March 17th and currently progressing through the commissioning phase, GOCE (Gravity field and steady-state Ocean Circulation Explorer) is set to measure Earth's gravity field with unprecedented accuracy. However, to do this means that the satellite has to orbit Earth as low as possible where the gravitational signal is stronger, but also where the fringes of the atmosphere remain.

To ensure that the gravity measurements taken by GOCE are of true gravity, the satellite has to be kept stable and in 'free-fall'. Any buffeting from residual air the satellite encounters along its orbital altitude of just 250 km could potentially drown the gravity data. This posed a technological challenge — the satellite structure had to be as aerodynamic as possible and a system had to be developed that would continually and instantaneously compensate for variations in air drag. Along with its sleek design, GOCE is able to achieve drag-free flight by employing an electric ion propulsion system mounted at the back of the satellite, relative to its direction of flight. Unlike conventional fuel-driven engines, the system uses electrically-charged xenon to create a gentle thrust. The system continually generates tiny forces between 1 and 20 millinewtons (mN), depending on how much drag the satellite experiences as it orbits Earth.

GOCE was recently switched to drag-free mode as part of the commissioning and instrument calibration activities. The system was found to be working perfectly, demonstrating that the electric ion thruster-based control system automatically produces the right amount of thrust to achieve drag-free flight. This could not be demonstrated at ground level before GOCE launched since it is impossible to create exact in-orbit flight conditions in a laboratory. Not only does this mean that GOCE will deliver clean gravity data but it also marks a significant step in satellite technology. GOCE is the first-ever mission to fly drag free in low-Earth orbit using an electric propulsion system. Other missions using advanced electric propulsion technology only have the system turned on for short periods of time. Once operational, GOCE's system will be constantly compensating for the variations in air drag as it orbits Earth.