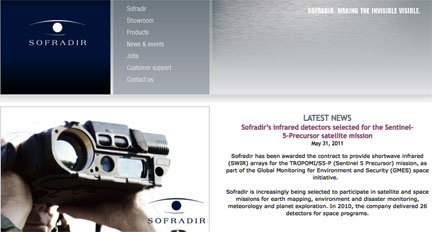 Link to Sofradir homepage
[SatNews] IR arrays are to be delivered as part of this new contract...

Sofradir, a developer and manufacturer of advanced infrared detectors for military, space and industrial applications, has been awarded the contract to provide shortwave infrared (SWIR) arrays for the TROPOMI/S5 - (Sentinel 5 Precursor) mission, as part of the Global Monitoring for Environment and Security (GMES) space initiative. GMES is a joint undertaking of the European Commission and the European Space Agency (ESA). Under the contract, Sofradir will deliver to SSTL (UK), a worldwide supplier of satellite and space equipment, off-the-shelf 1000x256 SWIR arrays, based on its Mercury Cadmium Telluride (MCT/HgCdTe) technology. Selecting an off-the-shelf model that has proven its performance and reliability has eliminated the need for Sofradir to go through a preliminary design phase, which can involve extensive screening and qualification. This translates into an 18-month saving in delivery time of the flight models. As a result, all deliveries will be completed within 24 months.
The Sentinel-5-Precursor mission, scheduled for launch in 2014, is intended to fill a time gap between Envisat, an earlier generation of earth observation satellites for climate and environment monitoring, and Sentinel 5, which will be on-board the Post-EPS satellite scheduled for launch around 2019. ESA funded the original development of the 1000x256 SWIR array for the Spectra mission in 1999. The SWIR with hermetic package without cooling system was selected because it offered some major advantages in reliability and power consumption. Unlike an active cooler that has moving mechanical parts that can shorten the overall life of the detector, passive cooling significantly increases reliability as it is dependent on the FPA only. Sofradir FPAs are known for their outstanding reliability in harsh environments. For example, Sofradir IR detectors aboard the spaceborne observation satellite Helios IIA have been operating continuously since the 2004 launch. The fully hermetic package with optimized thermal interface minimizes the cooling requirement. Other technological advances at Sofradir have enabled it to produce SWIR detectors that exhibit very high performance at relatively high temperatures (140K, -133°C), which means that they also consume less power.

Sofradir is increasingly being selected to participate in satellite and space missions for earth mapping, environment and disaster monitoring, meteorology and planet exploration. Its MCT IR detectors are in orbit in French military earth observation satellites, Helios IIA and IIB. Sofradir’s IR detectors are also being used on ESA’s Venus Express satellite (launched in 2005) and the French MoD SPIRALE satellites. All of the detectors are still exhibiting nominal performance. Other space activities include the Japanese Space Agency (JAXA) SGLI/G-COM (Second Generation GLI/Global Change Observation Mission), where Sofradir’s IR detectors are in Flight Model Phase. In 2010, Sofradir delivered 26 detectors for space programs. Development teams at Sofradir are also working on a 1000x1000 SWIR array partially funded by ESA. This detector has been earmarked as a candidate for several ESA-led projects in the future.