In its November edition, Germany’s independent leading consumer organization group, the Stiftung Warentest, has tested satellite and mobile Internet access and has awarded Filiago and Star DSL, service providers and distribution partners of the satellite-based broadband service ASTRA2Connect, with the overall grade of "GOOD" (1.8)1. In the subcategory quality of the Internet connection, both ASTRA2Connect providers were the only ones to be rated "EXCELLENT" (1.4)1. 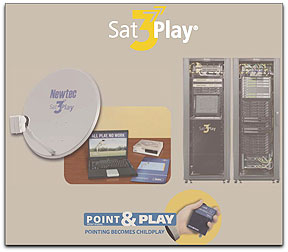 The leading European satellite operator SES ASTRA, one of Newtec’s major Sat3Play® customers, offers access to high-speed Internet with its interactive satellite broadband service ASTRA2Connect. The Sat3Play® broadband terminal is a state-of-the-art, high-performance equipment package designed for a true broadband experience over satellite. It implements the most efficient technologies, such as DVB-S2 modulation and IP traffic enhancement techniques such as TCP/IP acceleration and pre-fetching as well as encryption.

The respective satellite-based broadband services were compared and tested with a speed of 2.048 kbit/s in the categories Internet connection, handling, installation, versatility as well as deficiencies in the general terms and conditions. Only the ASTRA2Connect distribution partners Filiago and StarDSL could score in the evaluation and were classified "a real substitution for areas without DSL". The ASTRA2Connect satellite technology is based on Newtec’s Sat3Play® technology and was launched in early 2007. With speeds of up to 4 Mbits/s and prices starting as low as 19.90 euros per month, ASTRA2Connect offers highly reliable, always-on, interactive broadband Internet access, especially for areas deprived of or with limited terrestrial broadband access. The customer premises equipment — a satellite modem, iLNB and satellite dish — is the lowest cost available on the market and delivered with a Point&Play® tool for easy self-installation.