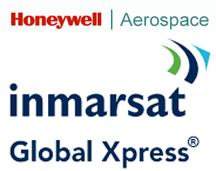 [SatNews] The goal of delivering ‘home equivalent’ high-speed, consistent wireless Internet connectivity for passengers and pilots on aircraft is a step closer—in a joint announcement, Honeywell (NYSE: HON) and Inmarsat (LSE: ISAT.L) confirmed that they have finalized the critical design review (CDR) of the GX Aviation aircraft avionics on schedule and it is anticipated that product certifications will be achieved later this year, followed by product introduction, which is expected during the first half of 2015.

Targeting passenger aircraft and business jets, GX Aviation is the first truly global high-speed in-flight connectivity service that will provide data rates to the aircraft of up to 50Mbps. Using GX Aviation, passengers will be able to do everything from real-time social media updates and emails to live-streaming TV, all while in flight, and from virtually anywhere in the world, over both land and sea. Completing the CDR marks the final development review for the GX Aviation aircraft avionics program. Inmarsat and Honeywell engineers completed the evaluation on schedule and executed a comprehensive audit of the system design, engineering model hardware and program.

Completion of this major milestone follows the successful launch of Inmarsat-5 F1, the first of three Ka-band satellites, from the Baikonur Cosmodrome in Kazakhstan, Russia on December 8, 2013. The second and third satellites are scheduled to launch later this year, providing full global coverage by the end of 2014.

During the process, Inmarsat’s team reviewed the final functional specifications of hardware designs, and the results of engineering units tests. These reviews will enable the continued progress of the GX Aviation program through product certification in 2014, product launch and global entry into service for commercial, business aviation and government customers in the first half of 2015.