Hughes Network Systems, LLC (HUGHES) has announced that its satellite-based broadband capabilities were successfully demonstrated during the Coalition Warrior Interoperability Demonstration (CWID), according to the newly-released CWID Final Report. Directed by the Chairman of the Joint Chiefs of Staff, CWID is an annual multi-national exercise designed to test new and emerging technologies against a backdrop of realistic, simulated operational scenarios. 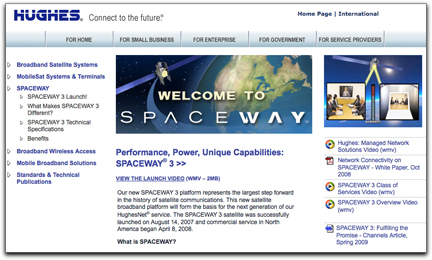 The final conclusions, taken directly from the report, are appended next... “The DSSPC [Defense Information Systems Agency Switched Satellite Communications Payload Cooperative Research and Development Agreement] demonstrated all stated capabilities while providing a very effective and reliable communication system. IP capabilities and packet switching performed by the SPACEWAY 3 satellite mean less administration paperwork and faster connection speeds, further enhancing the capabilities of other systems with high-capacity Ka-band satellites. Warfighters recommend fielding this technology as demonstrated during CWID 2009 because of its commercial availability as an established system, IP capabilities, the ability to support a multitude of technologies and applications over its satellite uplink, ease of use and its ability to enhance mission operations. Relatively quick to set up, its low complexity and the ability to carry on high-definition, clear, and stable communications with other locations was a valuable attribute. In the absence of terrestrial communications, the DSSPC system can provide solid, high-speed Internet, voice, data, and video communications, offering first responders and deployed troops several advantages.” The full report is available at this direct link.