Orbital Sciences — DARPA's Choice For A Bevy Of Birds

Orbital Sciences Corporation (NYSE: ORB) has been awarded a Phase 2 contract by the Defense Advanced Research Projects Agency (DARPA), Arlington, Virginia, to develop the final design for "System F6" (Future Fast, Flexible, Fractionated, Free-Flying Spacecraft). The Phase 2 award to Orbital came as a result of a down-select by DARPA from among several companies that participated in the program's Phase 1 study contracts in 2008 and 2009. The Phase 2 contract is valued at US$74.6 million over one-year. 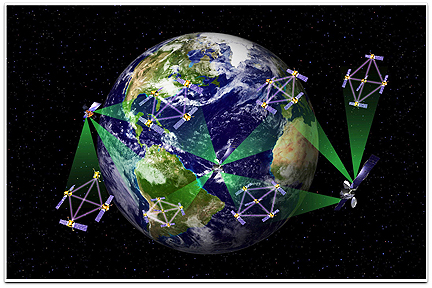 The objective of the System F6 program is to develop and demonstrate the basic building blocks of a radically new space architecture in which traditional large, multi-functional "monolithic" spacecraft are replaced by clusters of wirelessly interconnected spacecraft modules. Each of these modules performs a subset of the tasks performed by a large classical spacecraft and works together in a cluster to provide the same overall effective mission capability. By allowing the various functions of a spacecraft to be developed and launched separately, this type of "fractionated" system provides benefits such as reduced overall risk, budgetary and planning flexibility, faster initial deployment, and ultimately greater survivability, including selective replacement of damaged or obsolete elements of a complex spacecraft.

In the next phase of the System F6 program, Orbital will be responsible for the detailed design and ground testing of the new technologies, architectures and programmatic concepts required to successfully fractionate a space system. These include wireless data communications, cluster flight operations, distributed spacecraft computing systems, rapidly relocatable ground systems, and value-centric design methodologies.

The company's program partners include IBM and NASA's Jet Propulsion Laboratory.  Phase 2 will include development of the detailed design of the spacecraft modules, ground elements and launch options; a hardware-in-the-loop test-bed ground demonstration with new technology prototypes; and release of an F6 Developer's Kit, which will allow third-parties to design compatible fractionated modules. System F6 incorporates most key technology development in an "open source" format, a new and radical concept in spacecraft systems. All software source code, interfaces, standards and operating systems will be available to everyone, including the public. This will allow any interested third parties to develop modules compatible with the existing spacecraft network. These modules can launch and connect to the already deployed cluster, allowing them to leverage resources available in the network.  The eventual goal is to provide an open source compatibility platform where any new satellite launched into space can access and reap the benefits of a worldwide interconnected system, similar to how the Internet functions on Earth.