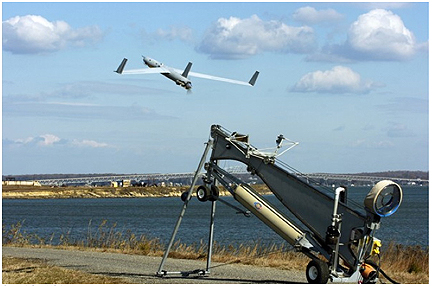 A total of five targets were engaged and destroyed during the testing, also a first for the U.S. Navy. Members of NAVSEA's Directed Energy and Electric Weapon Systems (DE&EWS) Program Office and NSWC Dahlgren fired a laser through a beam director on a KINETO tracking mount. Two additional UAVs were engaged and destroyed in flight on June 9th, with two more UAVs shot down on June 11th. These recent evolutions continued a series of progressively challenging tests using the prototype version of the Surface Navy Laser Weapon System (LaWS).

NAVSEA's DE&EWS Program Office is responsible for the research, development, integration, and acquisition initiation of DE&EWS for the Navy's surface forces. NSWC Dahlgren focuses on research, development, test and evaluation in the fields of military safety testing, integrated warfare systems, weapons and ammunition, sensors and directed energy and homeland and force (military personnel and equipment) protection. Recent advances in commercial high energy fiber welding laser development for commercial welding use have made the deployment of a weapons grade laser based defense system on board naval vessels a realistic possibility. DE&EWS is transitioning technology from the laboratory to prototype system development/test for operational development and use. One of the multiple 'game changing' technologies that is under development includes laser weapons that provide for speed-of-light engagements at tactically significant ranges with cost savings realized by minimizing the use of defensive missiles and projectiles.