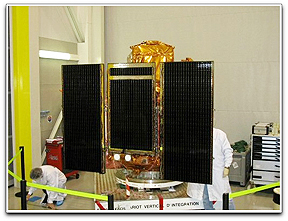 THEOS, the THailand Earth Observation Satellite developed by Astrium for the Thai Space Agency GISTDA (Geo-Informatics and Space Technology Development Agency) is expected to be launched on August 6th aboard a Dnepr rocket from the Yasny launch site in Russia. THEOS will observe the Earth from the same orbit as the French Spot-5 satellite at 820 km altitude. THEOS will be fully owned and operated by GISTDA and will provide Thailand with worldwide, geo-referenced imagery. The satellite will also offer image processing capabilities for applications in cartography, land use, agricultural monitoring, forestry management, coastal zone monitoring, and flood risk management. THEOS will provide access to any part of Thailand in less than 2 days.

The THEOS contract includes the production and launch of one optical satellite, the development of the ground segment necessary to operate and control the satellite directly from Thailand, and facilities for image archiving and processing. The THEOS satellite is based on the new generation of the Astrium Optical Earth Observation high performance satellites, the AstroSat product line. Twenty Thai engineers joined the Astrium development team in Toulouse and attended intensive space program training. The THEOS satellite payload features high resolution in panchromatic mode and wide field of view in multispectral mode and has been tailored to Thailand’s specific needs with a worldwide imaging capability.

GISTDA and Astrium have been working with different public organisations in Thailand for more than 2 years to demonstrate the benefits Thai authorities will gain with the THEOS programme and to pave the way for operational monitoring programmes to be set-up by the appropriate Thai authorities. An operational SPOT receiving station, hosted and operated by GISTDA, has been intensively used in preparation for THEOS (SPOT and THEOS images have very similar characteristics, with a higher resolution for THEOS). Among the main successful achievements: Astrium, a wholly owned subsidiary of EADS, is dedicated to providing civil and defence space systems and services. Its three main areas of activity are Astrium Space Transportation for launchers and orbital infrastructure, Astrium Satellites for spacecraft and ground segment and its wholly owned subsidiary Astrium Services for the development and delivery of satellite services.
Topical Tags :
Launch
Regional Tags :
Asia/Asia Pacific