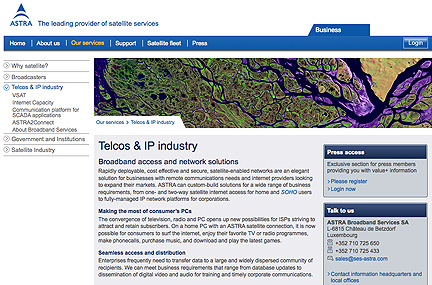 SES ASTRA, an SES company (Euronext Paris and Luxembourg Stock Exchange: SESG), has launched this new solution via its satellite-based broadband service, ASTRA2Connect. The so-called sub-distribution service developed by SES ASTRA allows telecommunication operators and internet service providers everywhere in Europe to offer satellite-based broadband connections via the existing last mile infrastructure. The new service from SES ASTRA was presented for the first time at this year’s digital technology exhibition CeBIT in Hannover, Germany. The new technology will be showcased in Baden Württemberg, Germany, together with the Ministry of Rural Affairs, Nutrition and Consumer Protection and supported by technology partners Nokia Siemens Networks and NDSatCom.

The sub-distribution allows SES ASTRA to provide small communities in the white spots with broadband connections of up to 6 Mbit/s without households needing to install a satellite antenna at their homes. The satellite broadband connection is installed at the street cabinet of the community, and the broadband connection to the end customer is realized via the last mile infrastructure already in place. End customers only need a standard DSL modem to access the broadband internet launched by SES ASTRA. ASTRA2Connect is an interactive broadband internet service introduced by SES ASTRA that is offered via distribution partners to end customers and businesses in Europe, the Middle East and Africa. The service is independent from any terrestrial networks and is immediately available anywhere within the footprint of the SES ASTRA satellites. To date, ASTRA2Connect has more than 75,000 endusers in Europe.