[SatNews] GOES-12 has seen it all, from Hurricane Katrina that hit the Gulf Coast in 2005, to the Christmas blizzard that crippled the Central United States in 2009.

The satellite even traveled south of the equator to provide coverage for South America that started in 2010. Now, after more than 10 years of stellar service, NOAA’s Geostationary Operational Environmental Satellite (GOES)-12 spacecraft is being retired. Launched on July 23, 2001, the satellite lasted well beyond its original operational design life of two years for on-orbit storage and five years of actual operations to support forecasters and scientists in NOAA’s National Weather Service. 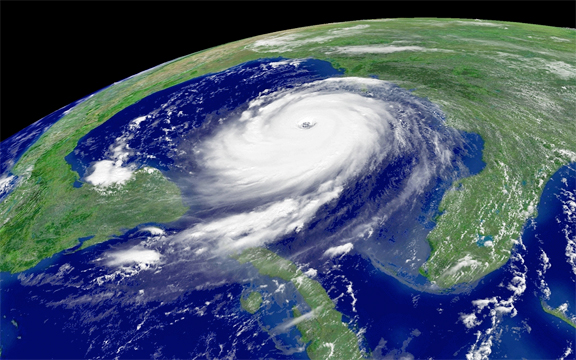 GOES-12 captured this visible image of Hurricane Katrina on August 28, 2005, at 11:45 a.m. (EDT). At that time, the storm was at Category 5 strength and projected to impact New Orleans. Image credit: NOAA.
“GOES-12 gave the Western Hemisphere many years of reliable data as the operational eastern GOES for accurate forecasts, from small storms to those of historic proportions,” said Mary Kicza, assistant administrator for NOAA’s Satellite and Information Service.

Built by Space Systems/Loral, GOES-12 became operational April 1, 2003 as the GOES-East satellite, monitoring weather across the U.S. East Coast and part of the Atlantic Ocean. On May 10, 2010, when GOES-12 was no longer able to be maintained to meet the requirements of the National Weather Service, it was shifted to a new position, where it provided coverage of weather conditions affecting South America, including volcanic ash clouds, wildfires, and drought. 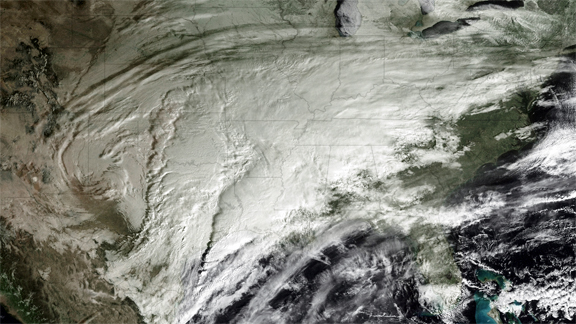 On January 29, 2010, GOES-12 captured a powerful storm developing in the U.S. mid-west. In the coming days, two blizzards hit the East Coast resulting in historic snowfall totals. Image credit: NOAA.
When NOAA decommissions a geostationary satellite such as GOES-12, it is boosted further into orbit, the remaining fuel is expended, the battery is disabled and the transmitters are turned off. These maneuvers reduce the chances the satellite will collide with other operational spacecraft. Additionally, decommissioning lowers the risk of orbital debris and stops the satellite from transmitting any signals that could interfere with any current or future spacecraft.

NOAA continues to operate GOES-13, which serves as the GOES East satellite for the United States and GOES-15, which is the GOES West satellite - both hovering 22,300 miles above the equator. NOAA also has an orbital backup geostationary satellite, GOES-14, which can be activated if any of the operational satellites experience trouble.

Kicza added, “The NOAA-NASA partnership is making steady progress toward developing and launching the more advanced GOES-R satellite series to position us into the future.”

GOES-R is expected to more than double the clarity of today’s GOES imagery and provide more atmospheric observations than current capabilities with more frequent images.

Data from the GOES-R instruments will be used to create many different products that will help NOAA meteorologists and other users monitor the atmosphere, land, ocean and the sun. GOES-R will also carry a new Geostationary Lightning Mapper that will provide for the first time a continuous surveillance of total lightning activity throughout the Americas and adjacent oceans. In addition to GOES, NOAA also operates the polar operational environmental satellite (POES) program satellites, the Defense Meteorological Satellites Program series satellites and the Suomi NPP spacecraft.

NOAA’s mission is to understand and predict changes in the Earth's environment, from the depths of the ocean to the surface of the sun, and to conserve and manage our coastal and marine resources.