Maxar Technologies (NYSE:MAXR) (TSX:MAXR) has teamed with Huntsville, Alabama-based, Dynetics to support the company in building and demonstrating the power and propulsion element for the Gateway, an essential component of NASA’s Artemis lunar exploration program and future expeditions to Mars — the teaming agreement establishes a framework for the companies to work together on this mission, with substantive work being executed by Dynetics in Huntsville, Alabama.

As recently announced, Maxar was selected by NASA to build and perform a spaceflight demonstration of the power and propulsion element spacecraft. The spacecraft is the first element for the NASA-led lunar Gateway, which will play a critical role in ensuring that NASA astronauts can land on the surface of the Moon by 2024 while serving as a vital platform to support future missions to Mars and beyond. The mission is targeted for launch by the end of 2022 and will provide power, maneuvering, attitude control, communications systems and initial docking capabilities for the Gateway. 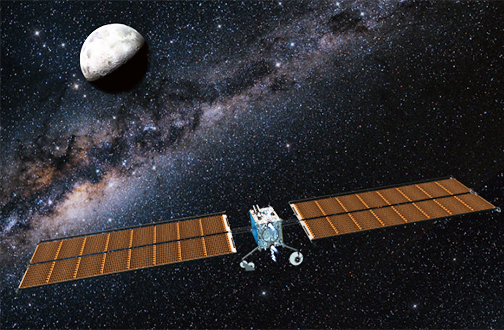 Maxar has signed an agreement to team with Huntsville, Alabama-based Dynetics on the power and propulsion element for the NASA-led Gateway. Artistic rendition is courtesy of Maxar.

The agreement enables Dynetics to collaborate with Maxar in the design, manufacturing and operations of Maxar’s power and propulsion element spacecraft. Dynetics has a wide range of capabilities to support Maxar in areas such as propulsion systems, mechanical and propulsion testing, system integration and assembly, and mission operations.

Mike Gold, Maxar’s VP of Civil Space, noted the company is thrilled to add Dynetics to the team and bring power and propulsion element work to Huntsville. Dynetics has decades of expertise in human space exploration and will play a critical role in executing the Artemis mission, landing the first woman on the surface of the Moon, and establishing the sustainable space infrastructure that is necessary to explore Mars.

Kim Doering, Dynetics VP for Space Systems, commented that this is an exciting time for lunar exploration. The firm looks for space partners that share similar core values and are eager to see America return to the Moon. Maxar fills that role and Dynetics is glad to be on the team. Maxar’s power and propulsion element will be a vital element of the lunar Gateway and will aid in the establishment of a sustainable presence on the Moon.