[Satnews] Ten years ago this month, a bold mission launched on humankind's first journey to Pluto.

The New Horizons Team, which conducted the stunningly successful mission to and flyby of Pluto, is the winner of the National Space Society's 2016 Space Pioneer Award for Science and Engineering. The team is led by the Southwest Research Institute and Johns Hopkins University Applied Physics Laboratory. 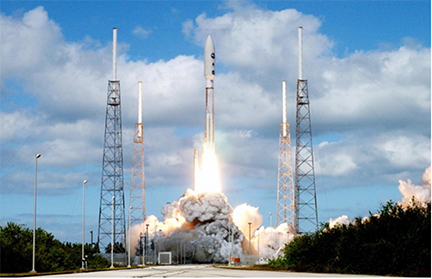 The 2006 launch of the Pluto New Horizons Mission.

This award will be presented at the National Space Society's 2016 International Space Development Conference® (isdc2016.nss.org). It will be accepted by Dr. Alan Stern, the Team's Principal Investigator and two other member of the mission team, Mission Systems Engineer Chris Hersman, and Deputy Project Scientist Dr. Leslie Young, on May 20, 2016. This will be the 35th ISDC and will be held in San Juan, Puerto Rico at the Sheraton Puerto Rico Hotel. The conference will run from May 18-22, 2016.

The Space Pioneer Award consists of a silvery pewter Moon globe cast by the Baker Art Foundry in Placerville, California, from a sculpture originally created by Don Davis, the well-known space and astronomical artist. The globe, as shown at left, which represents multiple space mission destinations and goals, sits freely on a brass support with a wooden base and brass plaque, which are created by Michael Hall's Studio Foundry of Driftwood, TX. NSS has several different categories under which the award is presented each year, starting in 1988.

This Award recognizes the team's success in conducting a mission that has lasted now over a decade, starting with the launch on Jan 19, 2006. Humanity went from seeing just a tiny dot of light to seeing a complex, geologically active world in just a few days during the flyby on July 14, 2015. Maintaining the spacecraft as it continues to send back more images is still a critically important task. Displaying a wide range of terrains, Pluto has been revealed to have multiple active processes on its surface, with huge ice mountains possibly floating in a probably deep sea of soft, deformable nitrogen ice. There may be liquid nitrogen deeper beneath the surface. The ice has formed large arctic polygon-like convection cells covering wide areas of icy plains, which are very young and totally free of impact craters.

In some areas, nitrogen glaciers flow out of the mountains into the icy plains. Real water ice volcanoes may also have finally been found. Pluto's thin but compact atmosphere sports amazingly high haze layers and the rate of atmosphere loss is much lower than expected. Many other types of spectacularly patterned terrains are still unexplained, and as more images are returned from the spacecraft, Pluto and Charon's very different forms of "geology" will continue to be a major scientific topic for years to come.

This mission has generated the largest public interest of any NASA mission in recent years, has completed NASA's 50 year long quest to reconnoiter all of the planets known at the start of the Space Age, and represents the furthest exploration of a world by humanity.