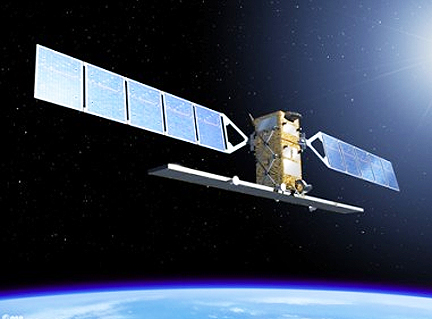 Artistic rendition of the GMES satellite
[SatNews] The cuts being instituted by the European Commission are unacceptable to a number of EU states...

Several European Union states are protesting the removal from the EU budget of a next-generation nuclear reactor and an Earth observation satellite they consider vital for Europe. London, as well as Germany, France, Spain, Finland, Sweden, Italy and the Netherlands, sent a letter to the European Commission demanding that the multi-billion-euro projects be reinserted in the plan for 2014-2020 spending period. French research minister Laurent Wauquiez warned that striking the two projects from the EU budget would have "very harmful consequences. It would be interpreted as a sign of disengagement by the European Union from major strategic sectors," he said Wauquiez, as one of seven ministers to have signed the letter.

The Earth monitoring program, called Global Monitoring for Environment and Security (GMES), would lose 5.7 billion euros ($7.7 billion) in funding. The Commission is proposing a total budget for the seven-year cycle of 1.0 trillion euros. The GMES system is based on satellites as well as airborne and water instruments such as balloons and floats that would collect data that EU states could use for climate change policies.

Governments are locked in tough negotiations with the European parliament over the EU budget. European lawmakers voted last month for a 5.2 percent increase in the 2012 budget, defying EU states demanding less spending at a time when the eurozone debt crisis is forcing them to implement drastic austerity measures. GMES faces stiff opposition within the 736-member parliament. The commission is proposing that the GMES and the nuclear reactor projects be funded through agreements between EU states instead of including them in the EU budget.