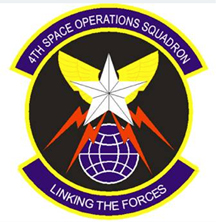 [SatNews] Recently, the men and women of the 4th Space Operations Squadron, in partnership with the Space and Missile Systems Center's Protected SATCOM Division, have...

...taken huge steps to ensure protected, survivable satellite communication for years to come. Initial payload contact was made October 29th, marking the start of on-orbit testing of the first Advanced Extremely High Frequency (AEHF) satellite, the newest addition to the Milstar/protected communication satellite family. This initial contact with AEHF was important because, for the first time, it involved 4 SOPS operators and the primary ground system 4 SOPS will use to command and control, the AEHF Satellite Mission Control Subsystem. 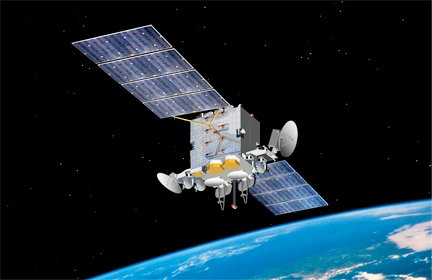 An artist's rendering of Adanced Extremely High Frequency satellite. AEHF-1 launched Aug. 14, 2010 and reached its operational geosynchronus earth orbit Oct. 24, 2011. (Courtesy photo Space and Missle Systems Center)
The new capabilities of this satellite enhance secure communications both here at home and down range. This new technology, orbiting more than 22,000 miles above the earth, will boost secure global communications bandwidth by a factor of 10. A comparison would be updating from a dial-up internet connection to a broadband line. Instead of just basic data and voice, AEHF has the ability to stream large bandwidth information with the same security provided by the current Milstar constellation. To perform this feat, AEHF will introduce a new Extended Data Rate bandwidth capability, which encompasses both the current Low Data Rate and Medium Data Rate bandwidths along with the higher bandwidths beyond the capability of the current Milstar constellation.

Along with this addition to the Milstar constellation comes new capabilities here. Currently there are three new Advanced Ground Mobile (AGM) command and control centers at various locations. These mobile facilities can command and control the entire constellation as a standalone operations floor if needed during a wartime environment. To ensure the survivability of these platforms, they are housed inside trailers that can be driven or flown to any location on Earth at a moment's notice to ensure continued control of the constellation.

Since October, 4 SOPS and SMC/MCA personnel, along with their contractor partners Lockheed Martin and Northrup Grumman, have been working around the clock to ensure AEHF will seamlessly fit into the Milstar constellation and provide warfighters with unprecedented secure communication capabilities. These tests are proving AEHF is a perfect fit and valuable addition to the current constellation. One significant test validated AEHF's ability to integrate into the Milstar constellation's complex cross-link network. This network allows data to pass from satellite to satellite without the need for ground stations to relay the data. Another successful test AEHF completed proved its ability to perform over-the-air rekey. This critical capability ensures that communications passed between our warfighters remains protected from the enemy.

First contact and the numerous tests successfully completed since that important day are significant milestones representing the culmination of years of planning and development. These milestones are especially important, considering the satellite travelled more than 14 months to reach its final orbit location following a thruster anomaly after its August 2010 launch. The entire team to include, 4 SOPS, SMC/MCA and their industry partners continue to work tirelessly to bring AEHF online for the warfighter and we are excited about the capabilities this new satellite will bring to the fight.