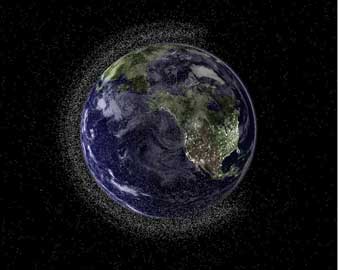 NASA-affiliated scientists have proposed using a low-powered, ground-based laser to nudge pieces of space debris off of collision courses with each other.

The proposal, presented in a paper submitted to Advances in Space Research and posted to arXiv.org, is a low-cost solution to the growing problem of space junk.

Most concepts — such as Japanese Space Agency proposal to use a giant fishing net to catch and remove debris in Earth orbit — require launching a satellite, which costs tens of millions of dollars.

The ground-based laser "is almost certainly going to be an order of magnitude cheaper than launching a satellite," study lead author James Mason, a NASA contractor associated with the Universities Space Research Association, told me today.

He and colleagues propose using a 5-kilowatt industrial laser — the same size used for industrial purposes such as cutting and welding in car factories — to nudge pieces debris off collision courses.

They would shine the laser on a piece of debris for the first half of its pass over their line of sight. The photons in the laser have enough collective power to slightly nudge the object.

Halfway through the pass, the team would analyze the piece of debris' orbit. If it needed a further nudge, it would be given on the subsequent pass.

"Engaging during every pass for a few days is typically enough, depending on the target's size and mass," Mason said in an e-mail he sent to me and other reporters. The process can target several pieces of debris a day, provided only one is being illuminated with the laser at a time.

Space debris is indeed a growing problem. According to the United States Strategic Command's catalog, more than 9,700 pieces of debris and 1,500 old rocket bodies are orbiting Earth.

More than 17 percent of those pieces of debris, Mason pointed out, are from the accidental collision between the Iridium 33 and Cosmos 2251 satellites in January 2009. "Objects smaller than 10 centimeters are not tracked but some still have enough kinetic energy to destroy or severely damage satellites or even manned spacecraft," he said in the e-mail.

The idea of using an industrial-strength laser — not something more powerful — is meant to help assuage fears that the technology would be used for nefarious purposes, such as blasting another nation's satellite.

"We are intentionally trying to make the system non-threatening ... this is, in general, not enough intensity to mechanically damage a satellite," he said. Brian Weeden, a technical adviser for the Secure World Foundation, told Wired.com the concept is less of a threat than other proposed systems, but "I don't think it is a long term solution. I might be useful to buy some time, but I don't think it would replace the need to remove debris, or stop creating new junk."

To get a feel for the potential threat space debris poses to satellites and other spacecraft, check out this video from the Guardian.

According to Holger Krag at ESA's Space Debris Office — which monitors more than 16,000 bits of junk in Earth orbit — a collision between two pieces of cherry-sized debris creates an explosion akin to a grenade.

John Roach is a contributing writer for msnbc.com.
Article source.